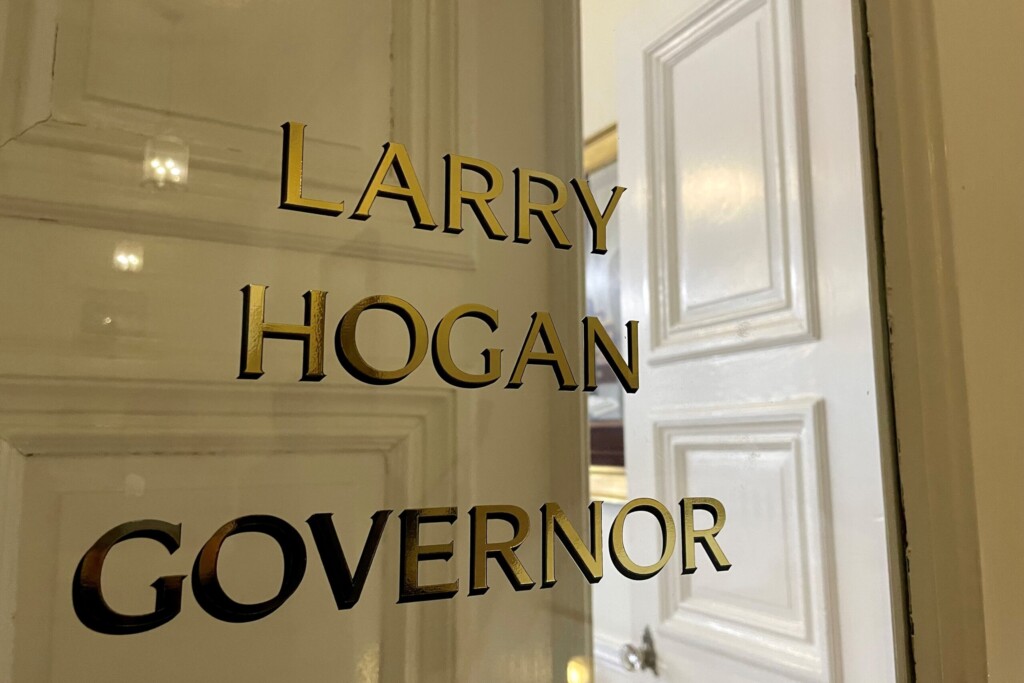 The door to the Governor’s Reception Room in the Maryland State House. The room is the traditional site of bill signing ceremonies in Annapolis. Gov. Lawrence J. Hogan Jr. (R) must decide by the end of this week whether or not to veto dozens of bills passed by the General Assembly. Photo by Danielle E. Gaines.

Gov. Lawrence J. Hogan Jr. (R) dispatched with one of the most closely watched bills sent to his office this legislative session on Monday, signing a new set of congressional district boundaries into law.

But the Democratic majority in the General Assembly voted last week to send dozens of other bills to the governor’s desk early this legislative session, a move that will force the governor to act on the measures by the end of this week and allow the legislature to override any potential vetoes before the 90-day session ends next Monday at midnight.

Because this is an election year, this is likely the only opportunity for lawmakers to override a veto. And Hogan’s actions are sure to garner additional scrutiny as the two-term governor mulls a bid for the White House in 2024.

Here, we have the complete list of the bills the governor is considering:

House Bill 937, the Abortion Care Access Act, would expand who can perform abortions in the state and provide $3.5 million in financial support to clinically train health care professionals to offer reproductive services. The bill would also make the state’s existing abortion care coverage under Medicaid permanent, and require private health insurance plans — with exceptions for those with religious or legal exemption — to cover abortion care without cost-sharing or deductibles.

Senate Bill 275, the Time to Care Act of 2022, would offer Marylanders 12 weeks of partially paid family leave each year to care for themselves or a loved one after a serious health issue and up to 24 weeks of paid leave for new parents.

Senate Bill 528, the Climate Solutions Now Act of 2022, would set aggressive goals for reductions in greenhouse gas emissions in Maryland and establish new policies to help achieve that goal, including by requiring more building electrification, creating a “green bank” that would invest state funds into private projects that reduce gas emissions and expanding the state electric vehicle fleet.

House Bill 20 would increase the membership of the Maryland Stadium Authority — an independent arm of state government originally established to fund and oversee professional sports stadiums that has expanded into other government construction projects, including schools, in recent years. The two new members of the board would be appointed by the speaker of the House of Delegates and the president of the Maryland Senate.

House Bill 90 would allow lawyers at the Office of the Public Defender to choose to enter into collective bargaining agreements with the state over their pay, benefits and working conditions. Under the bill, public defenders would also only be able to be disciplined or fired for cause.

House Bill 459/Senate Bill 691 is a wide-ranging juvenile justice reform effort based on recommendations of the Juvenile Justice Reform Council. The bill would generally prohibit kids under 13 from facing criminal charges, though charges could be placed in criminal court for the most serious crimes, including murder and sexual offenses. The bill would also set limits on terms of detention, out-of-home placement and probation that can be imposed by juvenile courts.

House Bill 580 would add sergeants and supervisors within the Maryland Transit Administration Police to the list of employees authorized to participate in collective bargaining.

House Bill 609 would require the state secretary of Health to provide a written explanation if a local health officer is fired and give the fired officer the opportunity for a hearing.

House Bill 649 would require greater Maryland Department of the Environment oversight of facilities operating under “zombie permits,” or water discharge permits that have been administratively extended beyond their original expiration without inspection.

House Bill 734 would require that at least $116 million is mandated annually for three state scholarship funds, and extend financial aid eligibility — under certain circumstances — even if a student’s family income increases. The bill also mandates $4 million a year for scholarship funds for children and dependents of public safety and military employees, including those that have lost their lives in the line of duty like Baltimore Police Officer Keona Holley.

House Bill 740/Senate Bill 566 would require the State Retirement and Pension System to consider the potential financial risks of the impact of climate change in investment decisions.

House Bill 891 would require the Maryland Department of Transportation to report cost estimates to the General Assembly for projects that the legislature added supplementary funding for in the state budget.

House Bill 1021 would require businesses that sell firearms to have 24-hour burglary alarm systems, as well as other safety measures including security bars, metal doors or physical barriers to prevent vehicles from crashing through.

House Bill 1080 would require the state’s Medicaid program to provide medical care to pregnant immigrants and their babies.

House Bill 1088 increases to $5 million the amount the governor must dedicate to the African American Heritage Preservation Grant Fund each year.

House Bill 1255 would ban schools from using physical restraints and seclusion on students.

House Bill 1450 would incrementally increase the sales and use tax revenues funneled to the Blueprint for Maryland’s Future Fund and establish new deadlines for the decade-long multi-billion-dollar school reform program.

Senate Bill 1 would allow the Maryland Department of Labor’s commissioner of labor and industry to investigate and send out stop work orders to state contractors and subcontractors that have violated the prevailing wage law.

Senate Bill 6 would establish rules and procedures for landlords who give tenants ratio utility bills, or utility bills based on factors such as unit square footage or the number of bedrooms. It would also require documentation of costs to a landlord who withholds the return of a security deposit and expand protections for tenants who are victims of abuse.

Senate Bill 158 would mandate that the state and counties equally split the cost for purchasing, operating and maintaining statewide voting systems. It would also require the Maryland State Board of Elections or local elections boards to open the same number of in-person precinct polling places for the 2022 election as were available during the 2018 election.

Senate Bill 222 would require bars, shops and clubs located at “The Block” in downtown Baltimore to implement security plans or close at 10 p.m. Additionally, the Baltimore City Downtown Commercial District Management Authority would be required to contract with the Baltimore Police Department to have two officers patrol the area on Thursday, Friday and Saturday nights.

Senate Bill 228 would expand the Maryland Corps program and allow its participants to transition into jobs or college programs.

Senate Bill 662 would require the comptroller to allocate $14 million from the Unclaimed Property Fund to the Access to Counsel in Evictions Special Fund in 2024. The governor would then have to include a provision in the 2024 budget bill to move that money from the special fund to the Maryland Legal Services Corporation.

Senate Bill 708 would create a compliance officer position in the Maryland Office of the Inspector General for Health to make sure that Department of Health employees comply with laws, agency policies and health care best practices. It would also create complaint investigation protocol.

Senate Bill 862 would require the Maryland Transit Administration to provide student transit passes for eligible students and participants in the Baltimore City YouthWorks program to attend school, work or educational extra-curricular activities at no cost.

With one week left in the legislative session, lawmakers continue to pass dozens of bills each day. If those measures are vetoed after the legislature leaves next week, the only opportunity for an override would be in a special session.