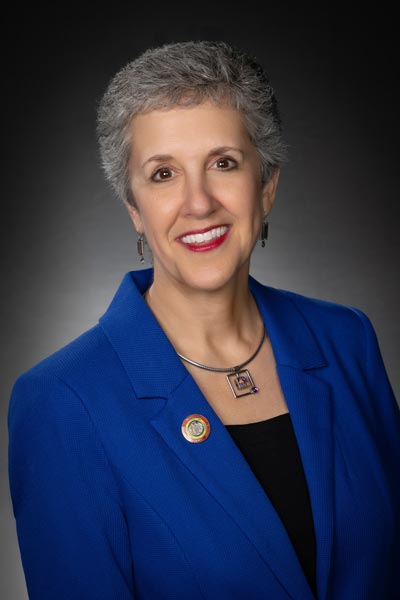 Sen. Cheryl C. Kagan (D–17) returned to elected office in 2015, where her energy, dedication, and experience in all sectors– public, private, and nonprofit– have made her an effective advocate for the residents of Gaithersburg and Rockville. In 2019, she was appointed Vice-Chair of the Education, Health and Environmental Affairs Committee.

Kagan is a nationally recognized expert on “Next Generation 9-1-1,” which will update our emergency response centers with modern technology resulting in increased reliability. Inspired by the death of Rockville activist and District 17 resident Carl Henn due to a 9-1-1 failure, she chairs the Maryland NG911 Commission, which concludes its 4th and final year of work in 2021. Priorities will include reclassifying 9-1-1 Specialists as “First Responders;” establishing a Statewide 3-1-1 service and authorizing workers’ compensation for 9-1-1 Specialists.

The Senator earned Next Generation 9-1-1 Institute’s 2018 National Leader Award as well as the Maryland State Firemen’s Association’s 2019 and 2020 Senator William H. Amoss Memorial Legislative Award for her commitment to public safety. She recognizes the critical importance of this service to people in need: “When 9-1-1 fails,” she often tells audiences, “people die.”

Senator Kagan enacted the nation’s first statewide ban on harmful expanded polystyrene (“Styrofoam”) food and beverage containers.  Her concern for the environment and sustainability led the Maryland League of Conservation Voters to name her a “Green Champion” and presented her with the 2019 Legislator of the Year Award (along with Del. Lierman).

With a long career in this vital sector, Kagan is also lauded as a key ally for her leadership on behalf of nonprofits. These essential organizations enhance our communities while employing roughly 10% of the State’s workforce. She is proud to have sponsored a law that established the Nonprofit, Interest-Free, Micro Bridge Loan (NIMBL) fund, which provides loans to organizations that have earned, but not yet received, government grants or contracts. In 2017, she was presented with the prestigious Phyllis Campbell Newsome Public Policy Award by the Center for Nonprofit Advancement. She was recognized (along with Del. Pena-Melnyk) as the first-ever Legislative Champion by Maryland Nonprofits. In 2020, the Senator sponsored a bill to streamline all State grant applications for nonprofit organizations into what will be called a “Common App.” Rather than spending precious time filling out multiple grant applications, organizations will have access to one generic version for all agencies. In 2020, Sen. Kagan established the National Nonprofit Legislative Caucus with the help of the National Council of Nonprofits and the National Conference of State Legislatures, enabling legislators from across the country to swap ideas that support this vital sector. When the General Assembly is not in session, Kagan serves as the Outreach & Development Coordinator for Community Reach of Montgomery County (formerly known as Community Ministries of Rockville), a nonprofit that helps vulnerable County residents.

Senator Kagan represented District 17 in the House of Delegates for two terms– from 1995 to 2003. After choosing not to seek reelection, she stayed involved in the community as the first-ever Executive Director of the Carl M. Freeman Foundation. With her guidance, the Foundation contributed over $1,000,000 each year to deserving nonprofits, primarily in the DC-metropolitan area. In addition to grantmaking, the Foundation created capacity-building programs and a leadership institute in partnership with Montgomery College.

Kagan later served as the Director of Community Engagement for BBYO, an international nonprofit promoting Jewish teen leadership and volunteerism. There, she was responsible for community outreach, partnerships, fundraising, and media throughout the Mid-Atlantic.

Sen. Kagan is a Montgomery County native and graduate of our public schools. After receiving a political science degree from Vassar College, she took graduate classes in public policy at the University of Maryland. She later taught two semesters of State & Local Government at Montgomery College.

Outside of the Senate

In her “free” time, Sen. Kagan has hosted Folk ‘N Great Music house concerts for the past 19 years with national touring singer/songwriters and is a nationally ranked Scrabble player. Kagan began a podcast on her YouTube Channel called “Kibbitzing with Kagan,” where she interviews individuals she finds fascinating. You can subscribe to the podcast on Apple Music. Additionally, she wrote a chapter that is included in “33 Gems: Wisdom for Living Pieces of Life’s Puzzle.” She was responsible for luring the North American Scrabble Championship to Baltimore in 2020, however the Coronavirus has caused it to be postponed until 2022. She is the Founder and Executive Producer of four annual UnNaugural Concerts featuring five different performers and raising money for five unique progressive causes each year– focusing on issues most affected by the Trump Administration.

Sen. Cheryl C. Kagan (D-District 17) represents Rockville and Gaithersburg and serves as the Vice Chair of the Education, Health and Environmental Affairs Committee. Sen. Kagan has earned a reputation as an independent-minded legislator with a strong voice for her constituents on public safety, consumer protection, transportation, government transparency, and more. While in the Senate, Kagan has passed landmark laws to help nonprofits; enhance our 9-1-1 emergency response systems; become the first State in the nation to ban “Styrofoam” food and beverage containers; and advocate for local governments. In addition to serving as Chair of Maryland’s Next Generation 9-1-1 Commission, Kagan established the National Nonprofit Legislative Caucus.

Senator Kagan was named a “Municipal Super Star” for the 5th time in 2020, citing her effective leadership on behalf of Maryland’s 157 cities and towns. She was grateful to receive the “2019 Legislator of the Year Award” by the Maryland League of Conservation Voters with Delegate Brooke Lierman for their work banning Styrofoam products from our food services. She was honored by the Maryland State Firemen’s Association with the 2019 and 2020 Senator William H. Amoss Memorial Legislative Award and the Next Generation 911 Institute’s National Leader of the Year in 2018. She was named a “Winner” by Maryland Matters for her “slew of legislative victories” during the 2019 session. She was recognized (along with Del. Pena-Melnyk) as the first-ever Legislative Champion by Maryland Nonprofits for her leadership on behalf of this vital sector. Sen. Kagan was selected three times as one of Maryland’s “Top 100 Women” and was inducted into The Daily Record’s “Circle of Excellence.” She has been named a “Green Champion” by the Maryland League of Conservation Voters. Most recently, the American Jewish Committee honored her with the Hyman “Bookie” Bookbinder Award for her advocacy, coalition-building, and community leadership.

In her “free” time, Sen. Kagan hosts Folk ‘N Great Music house concerts featuring national touring singer/songwriters and is a nationally ranked Scrabble player. She is also the Founder and Executive Producer of the UnNaugural Concert featuring five performers and raising money for five unique progressive causes each year– focusing on issues most affected by the Trump Administration.

What does a SCOTUS decision on Roe v. Wade mean for Maryland residents?