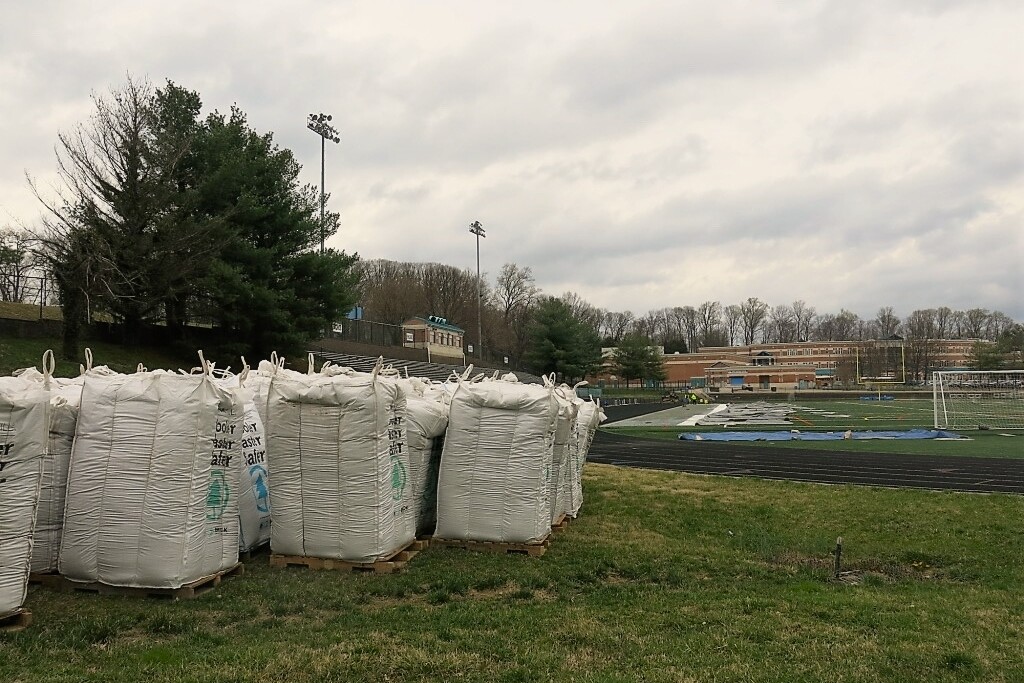 In late March, Diana Conway stopped by Walt Whitman High School in Montgomery County for a look at the $1.3 million synthetic turf field, a showcase for the Bethesda school’s sports programs. Installed three years ago, the field has been closed for repairs since November.

Conway heads Safe Healthy Playing Fields Inc., a nonprofit dedicated to raising awareness among the public and policy makers about the health, safety and environmental issues associated with synthetic fields.

The current closure is the second time in three years that Whitman’s turf system failed.

“The turf system is not draining at the rate required to make the surface playable after a rain event,” Principal Robert Dodd noted in a letter to the community in February and reprinted by the Parents’ Coalition of Montgomery County. When the field was shut down in November, student athletes complained of a slippery and potentially dangerous field surface.

Whitman’s field is among the 15,000 artificial turf fields across the United States according to the Synthetic Turf Council, the industry trade group. Synthetic turf began replacing grass sports fields in the mid-1960s, and by 2020 had grown into a $2.7 billion industry, adding up to 1,500 new installations each year according to the council.

When Conway arrived at the Whitman field recently, work crews were hosing down the field, getting ready to unload a new pine infill from giant white sacks that looked like miniature igloos erected on the endzone.

Conway says an average field loses from one to five tons of infill a year, which could be plant-based material like the pine at Whitman, but would more typically consist of shredded tire waste with silica.

“When we’ve talked to municipal wastewater managers for states and counties around the Chesapeake Bay, none of them had any idea of the volume of plastic and microplastic coming off these fields,” she says.

No federal or state laws regulate the tracking or disposal of synthetic turf fields.

Del. Mary Lehman (D-Prince George’s), who is wrapping up her first term in the House of Delegates, has sponsored bills throughout her tenure that would identify synthetic fields as hazardous waste to be disposed of properly. She has sponsored turf bills in 2019, 2020 and 2021 without success.

But this year, a bill has gained traction.

Lehman called her latest attempt, House Bill 131, a simple tracking mechanism with no fees, approvals or permits attached. It requires turf and infill producers to file a report to the Maryland Department of the Environment for all new installations after January 2023. Owners would take responsibility for any field in the ground prior to that date and file reports on disposal.

“We follow who put the field in the ground, and when it moves, where it goes. That literally is what this bill is,” Lehman said.

She said making those records public will create a strong disincentive for illegal dumping or improper disposal.

The bill was approved 97-34 by the House of Delegates in February and is currently under consideration by the Senate Education, Health and Environmental Affairs Committee.

Sen. Cheryl Kagan (D-Montgomery), vice chair of the committee and the sponsor of the Senate version of the bill, said this week that she’s hopeful the bill will come up for a committee vote in a day or two.

“We need to track these fields that are so toxic. We need to start gathering the data,” she said.

But the Synthetic Turf Council opposes the reporting requirement. “While the [council] supports the proper end-of-life handling for synthetic turf and responsible reuse and recycling,” CEO Melanie Taylor said, “Our view is that any chain of custody must place the reporting responsibility with the owner of the field.”

Despite those differences, conversations are ongoing. “My goal is for them to drop their opposition,” Lehman said. “But until we know what’s happening with these fields, I don’t think there will be sufficient pressure on the industry and their partners and entrepreneurs to want to figure out better ways of using, and recycling the parts of these fields.”

Lehman’s bill got more attention this session with the release of a statewide inventory of synthetic sports fields. Martha Ainsworth, the zero waste chair for the Maryland Sierra Club, led a 15-volunteer team that collected, organized and published the data.

Ainsworth, a former World Bank research economist, says the mandate was simple: “Let’s see how many [fields] there are, and then we’ll know the scope of the waste problem over the next eight to ten years.”

Ainsworth says that’s likely an undercount. After the public hearing they found several more and will continue to add to the list.

Ainsworth summed up the waste findings this way: “Using Synthetic Turf Council parameters, these [synthetic] fields represent 67,216 tons of plastic turf carpet and infill, 24.3 million square feet of plastic turf, and 122,850 cubic yards of infill likely to be disposed of in the next decade when the fields will be replaced.”

Or put in the context of a single field, like that at Walt Whitman High School, the infill equates to sixteen 30-cubic-yard dumpsters, and that’s without the plastic carpet, she said.

With few days remaining in the General Assembly, Lehman is cautiously optimistic that her bill will pass this year.

While narrow in scope, she hopes the measure could ignite a national conversation.

“There are no laws in the country around artificial turf. And, I’m not exaggerating, Maryland would be pioneering in doing this,” she said.

(Disclosure: Diana Conway is a financial supporter of Maryland Matters.)