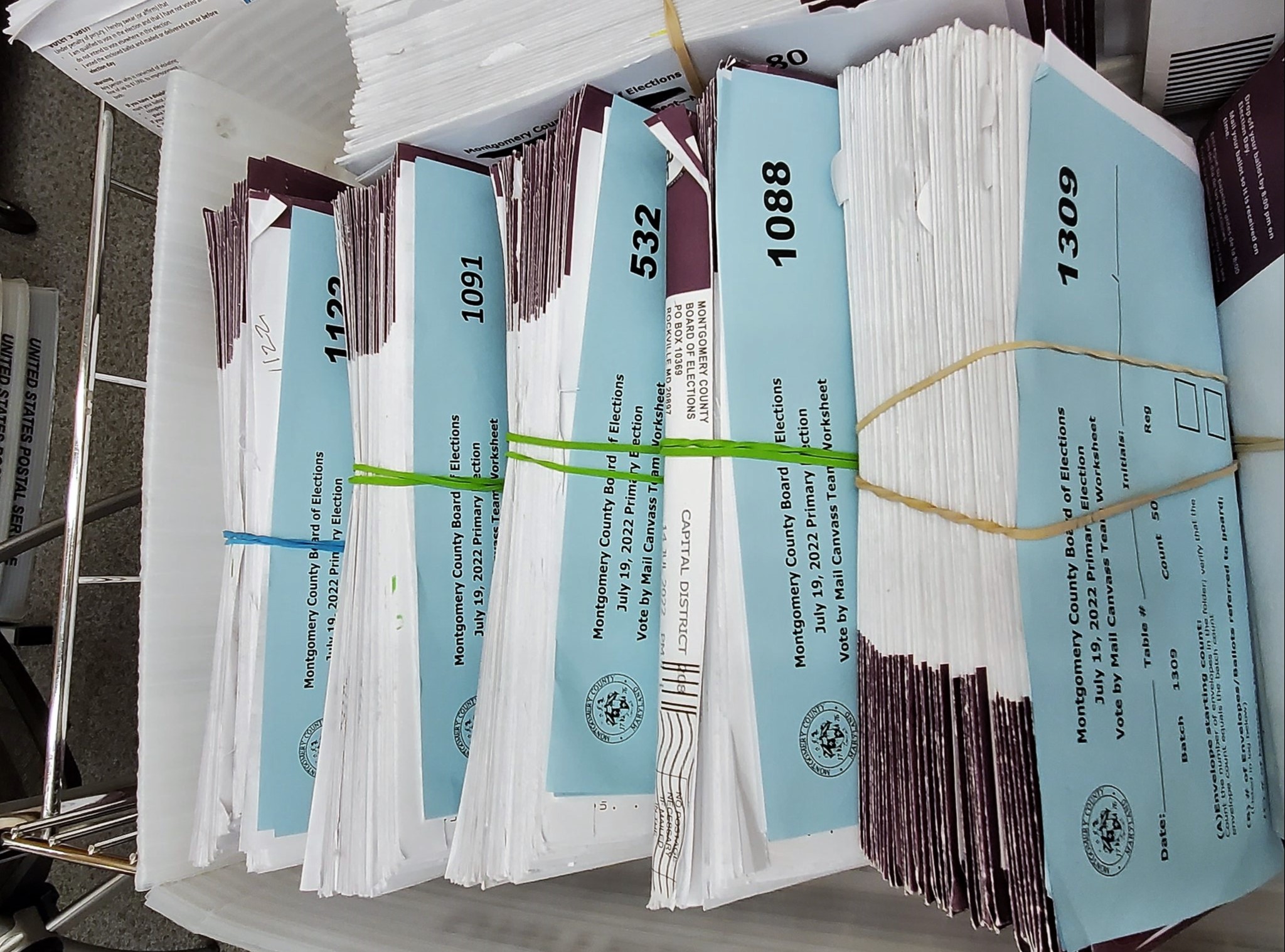 After an extended primary season, the Maryland State Board of Elections has formally asked the Montgomery County Circuit Court for help in speeding up mail-in ballot counting before the November general election, when more than 1 million mail ballots could be returned by voters.

In a petition filed Friday, the board is seeking a judicial order to suspend a state law that prohibits the opening of any mail-in ballot envelope before the Wednesday after election and asks the court to permit local election boards to begin processing mail ballots on Oct. 1.

The State Board of Elections voted unanimously last month to approve the legal action.

Board members said legal action was necessary after a spike in mail-in ballot participation during the primary election stretched ballot canvassing across multiple weeks in some Maryland counties.

Counting ballots and reporting election results quickly will help maintain the public’s confidence in the electoral process, board members said.

“The failure to ascertain election results in a timely manner may cause unintended and deleterious legal effects at the state and national level. That failure may also sow uncertainty and unjustified mistrust in the final results of the election,” Friday’s petition stated.

The petition seeks the same solution that was approved by Gov. Larry Hogan (R) by executive order for the 2020 election, which allowed mail-ballot counting to begin 25 days before the start of in-person early voting. That order, tied to the COVID-19 pandemic, has since expired.

The General Assembly passed a bill this year that would have allowed ballot processing and counting of mail-in ballots eight days before early voting started.

But Hogan vetoed the bill, citing concerns that it lacked other “basic security measures.” The veto message did not take issue with early mail-ballot canvassing and noted the governor’s support for the process.

A copy of the petition was provided by Sen. Cheryl Kagan (D-Montgomery), who sponsored the 2022 bill. “Here’s hoping that we are making progress toward finally addressing the problems created by Gov. Hogan’s veto,” she wrote in an email.

The popularity of mail-in balloting exploded during the COVID-19 pandemic, when mail ballots were sent to every voter during the 2020 primary and a mail-ballot application was sent to everyone for the general election.

During the 2022 primary, voters returned an unprecedented 345,081 mail ballots — ten to 18 times as many ballots as past gubernatorial primaries.

While many local election boards saw manageable increases in the number of mail ballots, seven jurisdictions handled increases in orders of magnitude more than before, according to the filing.

“The sheer number of ballots caused cascading issues through the local and statewide canvasing and certification process,” the filing noted.

In Montgomery County, final results of a recount challenge in the county executive race were certified on Aug. 24 – 36 days after primary election day. In Frederick County, issues with the mail-in ballot canvass required the local board of elections to decertify its results on Aug. 10 and re-scan all 15,640 mail ballots it received.

“Because of these issues, and others, Maryland’s voters did not know the final results of their primary races and the State Board did not identify conclusively who to place on the general election ballot, for more than a month after the polls closed,” the petition states.

The filing also noted that a delay in one county could cause ripple effects in others because statewide certification is required for a statewide candidate to petition for recount or judicial review of an election.

During the primary, the recount in a District 23 House of Delegates race — considered a statewide office — couldn’t begin until the State Board of Elections certified statewide results on Aug. 15.

In the court filing, elections officials wrote that as many as 1.3 million mail ballots could be returned in November.

The filing says the issue “is simply one of math.”

If counting 345,081 mail ballots beginning two days after the primary election took 36 days to certify some races, counting three-to-four times that many after the general election could take more than 100 days.

“Maryland, however, does not have 100 days; Maryland does not even have the 36 days the primary canvass required,” the filing notes.

After the November election — which is legally required to be the first Tuesday after the first Monday in November and falls as late on the calendar as possible this year, Nov. 8 — are multiple national holidays, including Veterans Day, Thanksgiving Day and American Indian Heritage Day, which could delay ballot counting.

“Without the emergency relief requested, Maryland may not ascertain the results of the 2022 gubernatorial general election until after President’s Day in 2023,” the petition alarmingly warns.

A lengthy ballot count would also blow through multiple statutory deadlines, the early December swearing-in dates for high-level local offices like county executive and county council, and the Jan. 3 searing-in of Congress, the petition argues.

The state board is asking a judge to find that emergency circumstances require the court to intervene to protect the integrity of the electoral process. The filing is not an adversarial petition, so there is no defendant in the case.

According to the National Conference of State Legislatures, Maryland was the only state this primary election season that specifically prohibited processing mail-in ballots before the polls closed on Election Day.