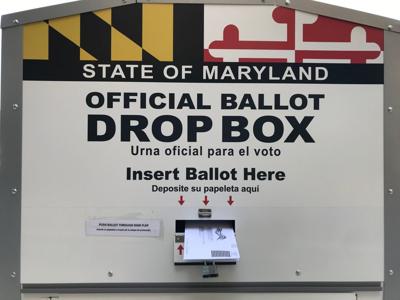 The court ruling Friday that will allow election officials to count mail-in ballots earlier is expected to speed up the counting of votes, which should mean an earlier certification of the 2022 election. Capital News Service photo by Karen Denny

The Montgomery County Circuit Court decided on Sept. 23 to approve the Maryland State Board of Elections’ emergency petition to allow the early processing and counting of mail-in ballots.

With the court’s approval, local boards of election can now begin canvassing and counting votes on Oct. 1. Votes will not be reported early, only opened and counted.

In his ruling, Judge James A. Bonifant said the board’s request constituted an emergency, as outlined by Maryland election laws, and it was within the court’s power to temporarily modify the election timeline due to that emergency.

Prior to the court’s ruling, Maryland election laws only authorized the counting of mail-in ballots on the Thursday after election day.

An influx of mail-in ballots during the 2022 primary elections motivated the board to put in a special request for the 2022 general election, only.

Board members explained that the mandated timeline for processing votes “could leave local, statewide, and even federal contests without certified results until late December 2022 or early January 2023.”

“Maryland is currently the only state in the union that forbids any kind of processing of mail-in ballots until after Election Day,” the board said.

Officials say that the mass of mail-in ballots this July delayed the certification of some races by weeks. Between one million and 1.3 million mail-in ballots are expected to be cast in this November’s contest.

Gov. Larry Hogan (R) issued an executive order in 2020 allowing early counting to remedy the heavy reliance on mail-in voting at the onset of the pandemic.

After that order expired, the General Assembly passed a bill in 2022 with a provision that would have allowed an earlier canvassing process, but it was vetoed by Hogan over concerns of election security.

“We welcome Judge Bonifant’s decision allowing the State Board of Elections to institute early canvassing for the general election, as I did in 2020 during the pandemic,” Hogan said in a press release.

“It worked well in that election, but partisan legislators dropped the ball on adopting our successful approach, making this step necessary.”

Republican gubernatorial nominee Dan Cox filed a petition challenging the board’s request. Cox’s lawyers argued that shifting the power to change voting laws from the General Assembly to the courts was unconstitutional.

Bonifant rejected this argument in last week’s ruling, stating that, “the powers of the three branches of government are not ‘wholly separate and unmixed,’” and citing a previous ruling.

He also rejected Cox’s attorneys’ claims that the board of election’s request did not constitute an emergency.

Cox filed another effort earlier this week to halt the board’s plan to certify the Nov. 8 elections earlier.

If the judge does not grant Cox’s appeal this week, counting of early mail-in ballots will not be halted.

“I am thrilled and relieved by Judge Bonifant’s thoughtful ruling,” Sen. Cheryl Kagan (D-Montgomery) said in a press conference outside of the court last week. “He concluded that, indeed, it was right for democracy that mail-in ballots be counted in a timely way.”

In response to a question by a reporter, Kagan committed to passing similar legislation to the 2022 election bill in the next legislative session.

“I have already talked to the senate president about bringing it back,” Kagan said. “We did not anticipate that Governor Hogan would veto [the 2022 bill] and create such a mess in the primary.”