April 19, 2016
Dear Neighbors and Friends:
Thank you for the honor of serving District 17, Gaithersburg and Rockville.  Now that the State Senate has adjourned, I am writing to tell you about what we did and did not do the past 90 days and how it may affect you and your family.
With a Republican Governor and a Democratic legislature, it was sometimes challenging to work in a bipartisan manner.  The session began and ended by overriding all 7 of Governor Hogan’s vetoes that we believed were ill-advised.
Despite the partisan divide, we got a lot done…
The Senate passed a $42.3 billion balanced budget unanimously.  It puts $1 billion into the “Rainy Day Fund” and still has a $400 million surplus.  In light of last year’s unrest in Baltimore, several proposals will help revitalize some of the City’s low-income neighborhoods.  It also provides almost $350 million to doctors across the State who treat people on Medicaid; helps local governments pay for teachers’ pensions; limits tuition increases at public colleges and universities; and funds important infrastructure projects.
Women in Maryland are paid 85 cents for every dollar men earn, an annual pay gap of more than $8,600.  To address this, we expanded “Equal Pay for Equal Work” to prohibit wage discrimination based on gender and gender identity. It also prohibits retaliation due to employees sharing income information among themselves.
The Senate unanimously passed the “Justice Reinvestment Act.”  This bill reduces mandatory sentencing for nonviolent crimes and begins to address racial disparities in sentencing.  It will save the State millions of dollars beginning next year and will shift penalties for drug-related cases from prison time to treatment. 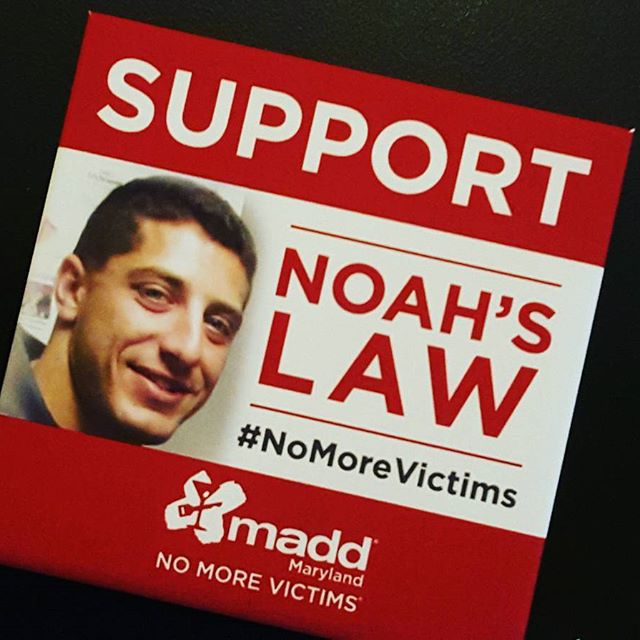 “Noah’s Law” will keep chronic drunk drivers off the road.  In memory of Montgomery County Police Officer Noah Leotta, who was killed by a drunk and drugged driver last year.  This law will require ignition interlocks on cars for drunk drivers with a blood alcohol level over .08, rather than .15.  Significant differences between the House and Senate bills were worked out in the waning hours of session.
The Democratic majority passed a bill to ensure transportation transparency, which establishes a scoring system to evaluate and prioritize transportation projects.  This will ensure thoughtful planning; enhance safety; improve services; support environmental stewardship; and promote cost-effectiveness.  The bill will become law despite a veto by the Governor.
Ensuring a more business-friendly State:
Maryland is ranked 44th of 50 states by Forbes magazine in an analysis of our tax policies. To address this, I supported a bill to provide tax relief to every Maryland taxpayer. Unfortunately, the bill did not pass. A similar effort may be considered by the legislature next year.
Northrop Grumman, one of Maryland’s largest private employers, will receive a tax credit for the next five years if it maintains at least 10,000 jobs with a minimum salary of $85,000 in the State.  I voted for the credit as Maryland needs to retain large employers whose spillover effect fuels hundreds of smaller businesses in the State.
Too many of our young people are saddled with crippling student loan debt.  The Senate unanimously passed legislation to allow Montgomery County to refinance college loans of residents to lower their interest rates.  Providing financial incentives for hard-working graduates to live and work in the County will greatly benefit our community and economy.
I am thrilled that the Senate President has appointed me as the Senator to sit on the Maryland Public-Private Partnership (P3) Marketing Corporation.  We will develop a branding strategy for the State; market the State’s assets; and encourage the location and growth of new businesses.  I will join the Secretary of Commerce, a member of the House, and 14 professionals from diverse backgrounds in this important endeavor.
Policymaking in the Education, Health, & Environmental Affairs Committee (EHEA):
My committee considered 542 bills, examined disparate issues, and heard from an eclectic group of stakeholders and interest groups.  Our jurisdiction covers education policy; business regulations; election law; energy conservation; environmental protection; ethics rules; liquor control; municipal government; and veteran’s affairs.  Some legislative highlights include:
Exploring Innovations in Education:  Several new educational ventures were enacted this year.

Expanding Voter Registration:  A Republican colleague and I spent countless hours on a bill to enfranchise more Marylanders.  Initially hotly debated and very partisan, we unanimously passed a much-revised version in the final hour of session.  The bill will allow citizens to register through more government agencies in an attempt to increase voter registration and participation.
Enacting My Legislative Initiatives 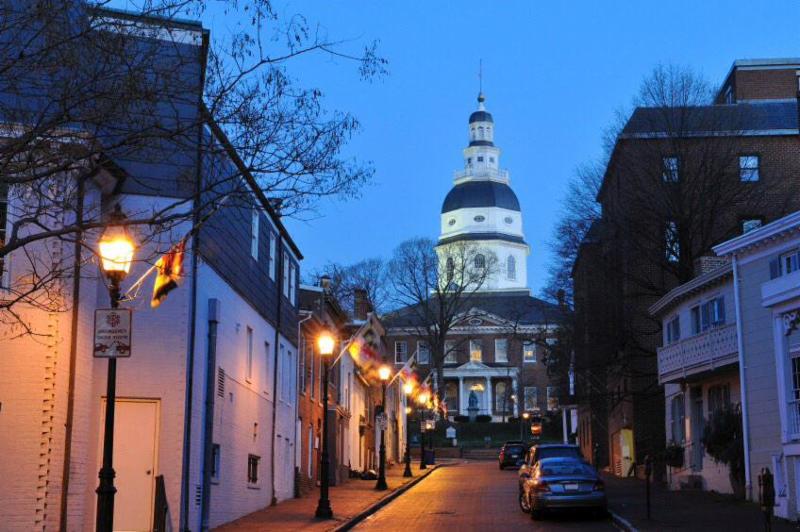 Translating State Government Websites (SB 28):  Last year, I discovered that 83% of Maryland government agency websites were monolingual, making them inaccessible to a growing population of non-English proficient residents.  These residents need information on business regulations, public safety, licenses, and health care.  I introduced a bill that passed the Senate last year but languished in the House.  I modified and reintroduced it; it passed this year!  My Language Access Bill is the first of its kind in the nation.  I am proud that Maryland will be more accessible to tourists and immigrant communities while saving money by reducing the need to use a professional translation service.
Informing New Voters (SB 170):  Maryland is a “closed primary” state.  Residents who are not affiliated with a party are not eligible to vote in our all-important primary elections. Along with the Minority Whip, I introduced a bipartisan bill to better inform residents as they register to vote.  It will warn registering voters of the consequences if they choose not to affiliate.
Updating our State Song (SB 222):  My effort to repeal and revise the State Song was only partially successful.  At a time when other states are jettisoning confederate symbols, this was the year to make a change.  We tried to remove the current offensive song and hold a competition to determine a new, more inclusive, and memorable tune.  The Senate approved a different version, which died in the House.  I am proud that my efforts contributed to the dialogue and visibility on the issue.
Ensuring Fertility Parity for All (SB 1):  Following up on my bill last year to ensure fertility parity, I sponsored and passed SB 1 to close a gap in health insurance for In Vitro Fertilization (IVF).  Requiring a husband’s sperm to be used in IVF treatments prevents sterile men (including our wounded veterans) from receiving coverage.
Bills to Bring Back Next Year
Often, new bills are not enacted in their first year.  The legislation below enjoyed successful hearings, legislative interest, and support from constituents… but unfortunately did not pass.

Preparing our 911 System for Crisis Management:  I authored two bills to improve our 911 emergency call system in memory of Carl Henn, a Rockville community activist.  Carl was struck by lightning.  Many people came to his aid and called 911 but all got busy signals.  He later died.
Requiring Transparent Pricing at Gas Stations (SB 1127):  Many gas stations charge more for those paying with credit and/or debit cards.  Because nearly three-quarters of consumers buy gas using plastic, it is deceptive to solely promote the lower cash price.  This bill would have required gas stations to post the credit price.  This consumer protection bill would have promoted honest marketing.  Several Senators expressed interest in working with me on this bill and bringing it back next year.
Testing New Technology to Reduce Impaired Driving (SB 970):  With the opioid epidemic and changes in marijuana laws, drugged driving is a growing crisis.  My bill would have launched a two-year pilot program to use oral fluid testing kits in four jurisdictions.  By using a simple, self-administered swab, police could get results for seven illicit drugs in just 7-8 minutes.  This contrasts with the 7-12 month delay for a suspected driver’s blood to be analyzed and returned.  It is irresponsible that habitual drug users can continue to drive for such a long period of time while awaiting trial.  Unfortunately, the bill died in the House with a very close vote of 9-11.
Once again, Senator Jamie Raskin introduced a bill to protect rape survivors by allowing them to terminate the parental rights of assailants to the children conceived during rape. This compassionate legislation would have prevented the rapist from further harming the victim and child.  Unfortunately, the “Rape Survivor Family Protection Act” was blocked from passage.  I hope to see it return next year and pledge to work with advocates to ensure its passage.
Funding Local Projects
The District 17 Delegation (Delegates Barve, Gilchrist, and Platt and I) obtained funding for important projects in Gaithersburg and Rockville.  I also supported other initiatives that will benefit greater Montgomery County.

Throughout the session, my office received hundreds of emails from constituents concerning pending legislation. Constituents also contacted us with issues ranging from reinstating Medicaid benefits; resolving MVA registration problems; repairing traffic lights; and settling tax disputes with the Comptroller’s Office, to name a few. Please do not hesitate to contact my office if you are having problems with a State agency.
Last year, I awarded financial aid scholarships to 43 students for their outstanding academic achievement and exemplary civic engagement.  In fact, one of these Senatorial Scholars, Abbey Viado, has been an intern with me in Annapolis, and she’s terrific! Click here to learn about my Senatorial Scholarships.
For the remainder of the year, my staff and I will handle constituent concerns, attend community events, and work on legislative matters.  I hope this update has provided you with helpful insights on some of our work this session and the changes that will soon take effect in our State.
Best wishes,
Cheryl
Cheryl C. Kagan
Maryland State Senator
District 17 (Gaithersburg & Rockville)

P.S.  With hotly contested presidential elections in both parties, as well as for the House and Senate (I hope you will join me in supporting Congressman Chris Van Hollen for U.S. Senate), it is more important than ever to vote!  For the first time, you can register when you go to any early voting site (through Thursday, April 21, 10 AM to 8 PM).  Alternatively, Maryland’s Primary Election Day is Tuesday, April 26th.  Polls on that day will be open from 7 AM to 8 PM.  Please be sure to vote!