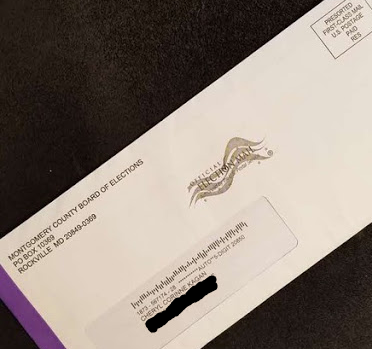 Annapolis, MD: On July 29th, Senator Cheryl Kagan and her staff went through the complicated 11-step process of requesting a mail-in ballot online. For weeks, Kagan publicized the link in emails and via social media in order to encourage the public to apply and streamline the voting process. Rather than getting an application and returning it before getting a ballot and returning that… this method would offer a short-cut directly to a ballot.
The State Board of Elections (SBE) and/or its vendor was supposed to remove from the mailing list voters who had already requested a mail-in ballot as of August 6th. Those voters would NOT be sent an application.
And yet, today, the Senator, her staff, and a number of her constituents all received ballot APPLICATIONS in the mail. To say that this is disappointing is an understatement.
According to the SBE website, more than 378,000 Marylanders have already submitted requests for a mail-in ballot. It is completely unclear whether voters who have received the application should reapply; local election staff will have to sift through tens of thousands of duplicate applications from voters who had previously requested a ballot. This mailing was an unneeded waste of taxpayer funds in an already expensive election.
“After all the errors in the June Primary, I expected that our State election officials would have been more diligent in their oversight of vendors for the General Election,” said Senator Cheryl Kagan. “Once again, the State Board of Elections has dropped the ball on a crucial part of the voting process.”
Senator Kagan (D-District 17) is in her second term representing Gaithersburg and Rockville. She serves as the Vice Chair of the Education, Health, & Environmental Affairs Committee. Kagan has earned a reputation as an independent-minded legislator with a strong voice for her constituents on election reform, public safety, consumer protection, and more. Kagan is active on social media and can be found on Facebook at Sen. Cheryl Kagan, on Twitter at @CherylKagan, and on Instagram at @CherylCKagan.