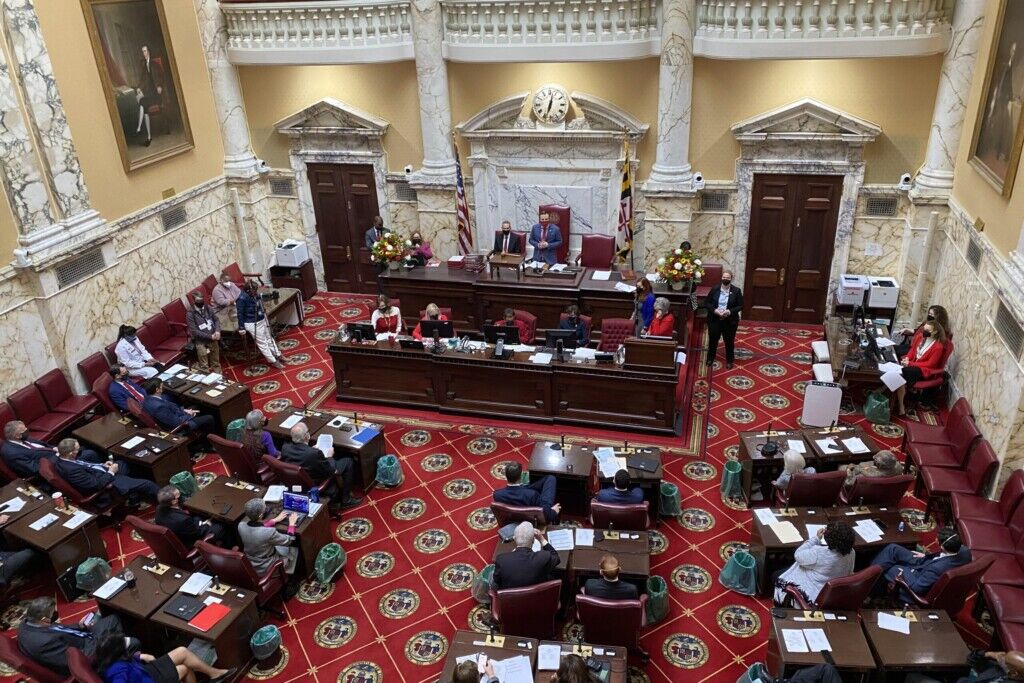 A view of the Maryland Senate chamber from the visitor’s gallery. (Maryland Matters/Danielle E. Gaines)

Sen. Stephen Hershey (R-Upper Shore) again raised concerns on the Senate floor Tuesday over how Blueprint for Maryland’s Future Accountability and Implementation Board members were chosen, contending that the board does not reflect the diversity of the state.

Hershey interrogated Sen. Paul Pinsky (D-Prince George’s), who sat on the committee that nominated AIB members, on the committee’s outreach efforts to find applicants for the board, which is charged with overseeing progress on education reform efforts throughout the state and can withhold funding from local school districts that fail to meet certain goals.

Pinsky said that the committee sent public announcements to 40 media outlets across the state and that all 180 legislators, being aware of the accountability board, bore some responsibility for reaching out to potential applicants as well.

Pinsky also highlighted that rural representatives on the Kirwan Commission approved establishing a seven-member accountability board. “We only had seven slots — every county did not get a slot based on geographic representation,” Pinsky said.

But Hershey took issue with the fact that the nominating committee did not reconsider the nominees following letters from various groups — including the Maryland Latino Caucus and Prince George’s County Executive — asking them to do so. “It wasn’t just a few pissed-off rural county legislators,” Hershey said.

“What was the hurry that this could not be addressed?” he continued. “When letters go to the nominating committee about the makeup of this board, and they did absolutely nothing about it, they’re doing that because they say — we are not accountable to the General Assembly.”

Pinsky pointed out that the board members were unanimously approved by the nominating committee, including by the two members selected by Gov. Lawrence J. Hogan Jr. (R). “We think we made the right decision,” said Pinsky, who called the AIB members “fine, smart individuals who care about the state.”

Pinsky also criticized Hogan for delaying the implementation of Blueprint for Maryland’s Future first by vetoing the bill in 2020 and second by not including full Blueprint funding in his budget. Because the Blueprint officially became law after a veto override last year, Hogan did not have to include this funding in his proposed budget for this fiscal year, which started July 1. To account for this, lawmakers directed the first $4.8 million from new sports betting revenue to go to the accountability board, which is being released as revenues are collected.

The Senate approved the confirmation of the AIB nominees — who had received initial approval from the Senate executive Nominations Committee earlier this month — in a 31-16 vote, largely on party lines. Two Democratic senators — Katherine Klausmeier (D-Baltimore County) and Ron Watson (D-Prince George’s) — joined the Republicans in voting against the nominees. Sen. Edward Reilly (R-Anne Arundel) was the only Republican who voted in favor of the nominees.

A measure to give Maryland voters another chance to sign the oath on their mail-in ballot envelope passed the Senate in a 33-14 vote Tuesday.

Maryland law currently requires that voters who don’t sign the oath on a mail-in ballot envelope have their ballot automatically rejected, but Senate Bill 163, sponsored by Sen. Cheryl C. Kagan (D-Montgomery), would allow Marylanders to provide a missing signature by going to their local board of elections or communicating with elections officials by phone, email, text message or mail.

Kagan’s bill would require local boards of elections to notify voters about the need for a signature within three days after the error is discovered, and would give voters until 10 a.m. on the tenth day after the election to correct the error. Kagan previously said more than 1,500 mail-in ballots were rejected due to unsigned oaths during the 2020 election, when that voting method surged in popularity.

“It’s not Republican or Democrat,” Simonaire said. “It’s about security, ensuring our elections have integrity.”

Senate Democrats pushed back on Simonaire’s call for signature verification, and Sen. Delores G. Kelley (D-Baltimore County) noting that her 87-year-old husband’s signature has changed due to tremors in his hands.

“A lot of people’s signatures change over time,” Kelley said.

The bill will now move on to the House of Delegates for consideration.