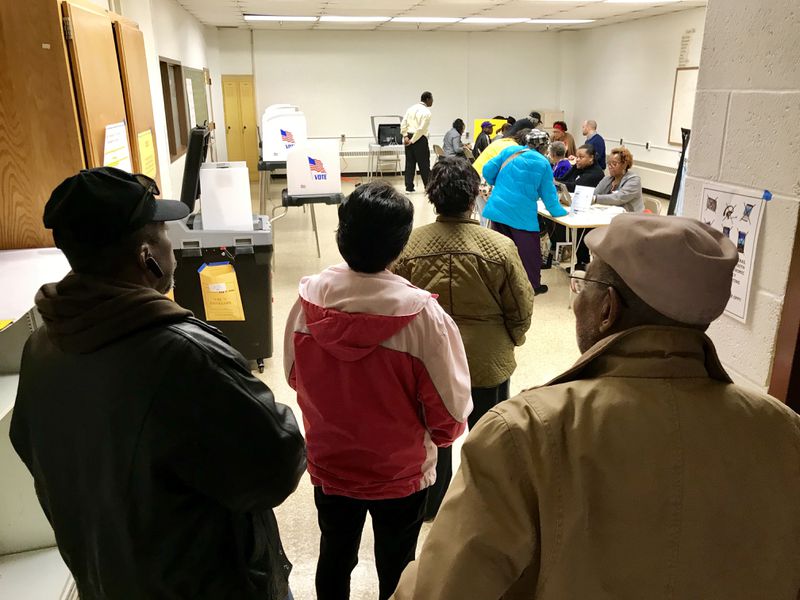 A network designed to transmit Maryland voter data to state officials in real time during elections had to be shut down during the 7th Congressional District primary after officials determined it was causing delays at polling sites. Voters lined up Tuesday at Westside Skill Center on Edmondson Avenue. (Karl Merton Ferron)

A network designed to transmit Maryland voter data to state officials during elections had to be shut down during the 7th Congressional District primary because it was causing significant delays at polling sites, the Maryland State Board of Elections said Wednesday.

State officials were using the network for the first time on an election day during a special primary in the district, which includes parts of Baltimore City, Baltimore County and Howard County

The problem involved pollbooks, the tablet-like computer terminals that elections staff use to pull up voters’ registration information.

The issue did not prevent anyone from voting, nor did it create other problems, officials said. The state simply reverted to a process it’s relied on for years: Polling officials physically removed the pollbook databases after the polls closed at 8 p.m. and drove them to their local boards of election for uploading to the state network.

“We have backup plans to backup plans, always focused on getting voters through the process,” Charlson said.

Still, the problems — in the wake of more serious and unrelated technological failures Monday in Iowa’s Democratic caucuses — reignited skepticism some local officials and Maryland Democratic Party leaders had expressed earlier regarding the new network. In recent months, they’ve questioned the network’s purpose, whether it’s vulnerable to cyberattack and if it has the potential to disrupt voting, particularly in the state’s most heavily populated, and largely Democratic, jurisdictions.

State Sen. Cheryl Kagan, a Montgomery County Democrat, has submitted emergency legislation to remove a requirement elections officials cited as the impetus for the network.

“This is unneeded, it is unwise, and it decreases rather than increases the security and safety of our election process,” she said.

“This is what numerous Democratic activists, leaders and voting rights advocates were concerned about,” said Alex Garcia, 36, a city resident who serves on his local Democratic central committee. He works on voter protection efforts for the Democratic Party and experienced a slowdown Tuesday when he went to vote near his home in Ednor Gardens in North Baltimore.

“It’s exactly what was predicted would happen, and is unfortunately not surprising — especially given what just happened in Iowa,” Garcia said. “This shines an important spotlight on the caution that should be exercised when introducing technology into the voting process.”

The network problem in Maryland came one day after Iowa Democratic Party officials said a “coding issue” with a new app created to compile and report caucus results delayed the presidential primary count there.

In Maryland, Kweisi Mfume and Kimberley Klacik were named the Democratic and Republican winners in the primary race for the seat of the late U.S. Rep. Elijah Cummings relatively early in the night. But some people — including board of elections officials — wondered what would have happened here in an election with higher turnout.

For Tuesday’s primary, poll workers were to use the networked pollbooks to pull up voters’ registration information and send it back to the state in real time. The information would include anyone voting by absentee ballot.

About 5:30 p.m. Tuesday, local polling officials reported to state officials that pollbooks were functioning very slowly as they tried to pull up voters’ registration information from databases stored on the devices, Charlson said.

State elections officials said the network is needed because big jurisdictions have failed in past elections to get data to the state in time for it to be processed on the day after each election. That’s a necessary step to find any potential duplicate votes — like someone who voted by absentee ballot, but also showed up on election day to vote — and remove them before a state-mandated review of absentee votes, which is required to start at 10 a.m. on the second day after an election.

They said the network is secure, and will be ready for use April 28 in Baltimore City and the counties of Anne Arundel, Baltimore, Howard, Montgomery and Prince George’s.

The equipment needed for the state’s six largest jurisdictions to use the network cost about $1.8 million, which the state got permission to cover using federal grant funding. Last month, officials from Montgomery County asked — unsuccessfully — for the elections board to exempt them from having to use the network, saying it was not needed and introduced unknown threats.

There are no plans to introduce the network in smaller jurisdictions. Kagan said the fact that the network is not being used in all counties, just in big ones with large Democratic voter bases, isn’t right.

“There is a political and ideological implication or result if we slow down access to the voting booth in Democratic areas,” she said.

Her bill would allow the state to start its review of absentee votes later than currently required. She said that would ease the pressure to get the information back to the state so quickly. There is a hearing Thursday on the bill in Annapolis.

Officials to Investigate Problems With New Wireless Networks That Emerged During Tues. Primary