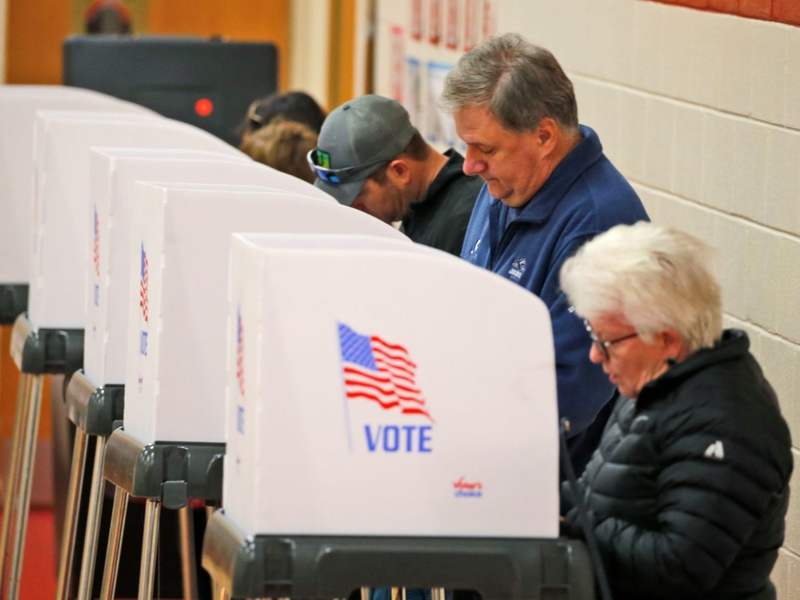 After delays and long lines during the 7th Congressional District’s special elections Tuesday, a bill is being introduced to avoid double counting ballots.

After issues with voting technology in parts of Maryland’s 7th Congressional District Tuesday, a bill is being introduced to the state legislature that would avoid double voting in future elections.

Glitches with the wireless network used to register voters caused some precincts in Howard County to shut down. That resulted in long lines and significant delays in special election results.

To avoid this problem in April’s primary election and November’s general election, Sen. Cheryl Kagan (D-Montgomery County) is proposing a bill that would avoid counting absentee ballots until after the regular count.

“By simply delaying the start of counting our votes by a few hours or a day or so, we can remove this risky problem,” Kagan said.

An official at the state board of election says they’re currently conducting an investigation to figure out what caused the slow down in their wireless network so similar problems don’t arise during the April 28th primary. This will be the first year that same-day voter registration is allowed on Election Day in the state.

“With the implementation of same-day voter registration, we need a network of poll books on election day,” said Nikki Charlson, the board’s deputy administrator. “We want to make sure the local boards have access to who voted on the day of voting.”

The problem occurred in the poll books, the tablet-like computer terminals that elections staff use to record voters’ registration information. The poll books are necessary for local boards of elections to conduct their canvass of absentee ballots on Election Day.

Charlson said the board was aware of the bill hearing, but they were attending 11 other hearings in the House on Thursday and counting provisional ballots from Monday’s election.

Lynn Garland, an expert on election security, was at the hearing Thursday. She says she’s opposed to wireless networking of poll books on election day.

“In support of my position, I have one word for you, Iowa,” Garland said referring to the glitches in reporting during the Iowa Caucuses on Monday.

“If these computer records were hacked and the voting records were changed, there would be no way to recover,” Garland says.

She also says that election technology needs to be kept simple and safe and avoid wireless systems where possible.

In a January letter to the state board, County Executive Marc Elrich and the County Board of Elections expressed concerns about cybersecurity risks and malfunction in the wireless system network, according to Kathleen Boucher with Montgomery County’s intergovernmental relations office.

“We have not been provided with any level of confidence that this system can be rolled out in a way that will protect the integrity of our voting system and the privacy of our voters,” Boucher said.

Montgomery County and five other large counties were told by the State Board of Elections that they would be required to use the wireless network poll books for the 2020 elections. County officials also expressed additional concerns about that cost burden implementing the new technology during the 2020 elections would have on the counties. The hardware costs $365,000 for each county.

“These costs do not include the extra technicians and poll workers that must be hired to deploy and support this system,” wrote county officials in the letter. “Mandating that the six largest county governments fund this initiative with local dollars would also set an extremely worrisome precedent.”

During a Board of Public Works meeting in January, Charlson said the cost burden is on the counties because during the procurement of the technology back in 2014 the bids came in much higher than expected.

“We currently pay $2.5 million a year, and under the new contract the portion is $4 million a year,” Charlson told State Treasurer Nancy Kopp at the meeting.

Kopp is supporting Kagan’s legislation. The Maryland Association of Counties is working with the six jurisdictions to apply for grant funding to pay for the new technology. Members of the State Board of Elections also expressed concerns over the implementation of the wireless technology in the six counties.

Board Member Kelley Howells expressed frustration at the January meeting that the board wasn’t briefed on the wireless network until September.

“Members of the State Board have never seen any data or analysis regarding the Election Day network. The Board can’t reverse its decision because they never made a decision,” Howells said, according to a transcript of the meeting.

Boucher asked the state board during the meeting to use its authority and not implement the wireless network during Election Day. The Board Chair, Michael Cogan, said it would not make a decision on that until after members discussed it.

The next board meeting is Feb. 27th.