Bernie Egerson, the US postman who prevented a New Mark Commons townhome fire from spreading, received honors from the Maryland Senate for his “heroic, life-saving actions.”

In introducing the resolution, Cheryl noted that the Senate in the past has recognized athletes, beauty queens and educators.

“But the backbone of our community are those hardworking people who are often invisible to us,” she said. 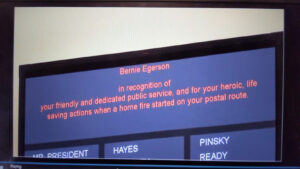 “Bernie Egerson: in recognition of your friendly and dedicated public service, and for your heroic, life saving actions when a home fire started on your postal route.”

The resolution was adopted exactly one year after the day in March 2020 when the Senate adjourned prematurely due to the COVID pandemic. Bernie, who as Cheryl noted is modest about publicity, was on camera in a virtual connection to the Senate for the award.

In January, Bernie was trying to deliver mail through the door slot of a townhome in the 800 New Mark Esplanade block when smoke came pouring out. The smoke alarm was blaring, the dog was barking, but no one responded to his pounding on the door.

He then knocked on the next door neighbor’s door, and the rest is history. The neighbor, Ruth O’Sullivan, called 911, helped Bernie locate the absent residents through the New Mark neighborhood directory and took in the dog. Fire trucks came and put out the smoldering fire, which apparently had started when the dog jumped up onto a kitchen counter to snack on some brownies and inadvertently lit the gas stove. 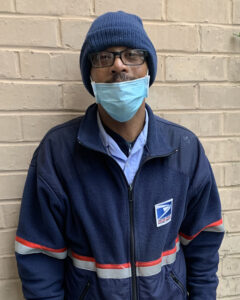 Bernie the postman, who delivers mail to our neighborhood, posed the day after the fire for this photo by Ruth O’Sullivan

Senator Kagan noted that the house could have blown up, and neighbors could have been “injured or lost.” But thanks to Bernie’s “quick witted actions,” none of that happened, she said.

Bernie himself has been a reticent hero. In an interview with the newsletter after the fire, Bernie shrugged off the praise.

“I was just in the right place at the right time. We’re all part of this community, we help each other,” Bernie said.