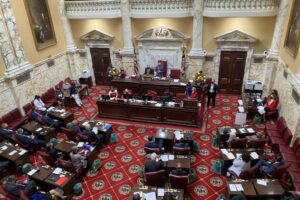 A view of the Maryland Senate chamber from the visitor’s gallery. Photo by Danielle E. Gaines.

That bill is a top legislative priority for Gov. Lawrence J. Hogan Jr. (R), and as originally introduced would have required a comprehensive annual report on the sentencing decisions by individual judges, including details on sentences outside of the Maryland Sentencing Guidelines.

The bill was amended to remove its emergency status and aggregate the published sentencing data by county or circuit to not single out individual judges.

Republican lawmakers preferred the more detailed reporting requirement, but the amended bill ultimately passed unanimously out of the Senate during a Monday evening floor session.

Hogan has introduced versions of the bill since 2019. That year, an amended judicial reporting bill passed the Senate late in the legislative session, but did not move forward in the House.

Polycyclic aromatic hydrocarbons are chemicals that occur naturally in coal, crude oil, and gasoline, and result from burning coal, oil, gas, wood, garbage, and tobacco, according to the Centers for Disease Control and Prevention. According to the CDC, those chemicals can cause blood and liver problems with large amounts of exposure, and “scientists consider several of the PAHs and some specific mixtures to be cancer-causing chemicals.”

Sen. Paul G. Pinsky (D-Prince George’s) pushed back on Salling’s amendment, and said the fines are meant to ensure the bill is enforced and that people don’t use the banned coal tar sealant products.

Kagan said many major hardware stores don’t even carry the products that would be banned by the bill for fear of lawsuits.

“This is not easy stuff to find anymore,” she said.

Salling’s amendment was ultimately voted down 15-30.

Salling introduced another amendment that would’ve removed the term “parking area” from the bill, arguing that parking areas should be specifically defined, but that effort was likewise rejected in a 15-30 vote. Pinsky said banning the use of those sealants on driveways but allowing them in parking areas would “defeat the purpose” of the bill.