With I-270 in the background, state, county and local politicians as well as several activists rallied at Woodley Gardens Park in Rockville in opposition to the I-495, I-270 road widening project that will go before the Washington Council of Government for a second vote on Wednesday.

In mid-June, The National Capital Region Transportation Planning Board voted to remove the I-270 and I-495 express lanes from its Air Quality Conformity Analysis. Without that environmental study, Maryland would have to submit a revised plan if it wants to receive an environmental seal of approval.

Since then, at least one member of the planning board has changed and others were lobbied to change their vote. Md. Sen. Cheryl Kagan declared, “The governor and others have now stacked the deck.”

Del. Jared Solomon said a letter signed by 77 state senators and delegates was sent Tuesday morning to members of the planning board urging them not to vote to include the I-270, I-495 project in its environmental study.

Gov. Larry Hogan has issued statements and ads (shown below) in an effort to once again include the project into the environmental study. Tuesday morning, he offered Montgomery County $60 million in mass transit dollars to help gain support, according to County Executive Marc Elrich, who has fought to seek changes in the traffic-reducing plan for many years.

Also, Hogan threatened to remove funding for several road and other projects if the planning board doesn’t change its vote, but Elrich said it was a meaningless threat since none of the projects currently have any funding for the next five years. Elrich, Kagan and Rockville Mayor Bridget Donnell Newton all referred to Hogan’s attempts to change the board’s votes as “bullying”.

Should the planning board change its vote, the road widening plan still would have to be supported by the three-member Board of Public Works. Gov. Hogan is a member and strongly supports the plan that calls for managed toll lanes and a new American Legion Bridge. State Treasurer Nancy Kopp, a Montgomery County resident, previously has expressed her opposition to the plan.

The third member, Comptroller Peter Franchot, who is running for governor, is considered a swing vote.

Elrich and members of the Montgomery County council are opposed to the current P-3 Partnership Plan and would prefer to have reversible direction lanes during rush hour, more mass transit options including extending the Marc train line and further study on the environmental impact of the road and whether it is still needed now that more workers are not commuting to the office five days a week. He spoke out against the toll lanes, saying they could surpass $4 for a 12 mile stretch. 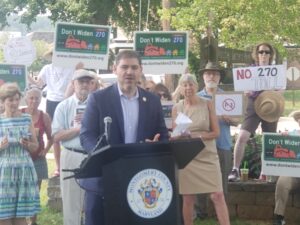 Regardless of the planning board’s vote, Elrich said he hoped to continue discussions on how to best deal with traffic woes.

Sally Stolz, of Don’t Widen 275.org, said Hogan’s plan is too expensive and won’t help commuters. “His plan will create congestion, not relieve it,” she said, noting that to enter a toll lane while already on the highway, drivers would have to exit, drive on local roads and then reenter the highway. Plans do not include a way to merge onto the toll roads like on I-95, she said.

Kagan told the small group gathered at the rally that “the bottom line is, we need data.” She questioned how money could be spent before an environmental impact study is done as well as a study on the affects of the coronavirus on traffic.

Also speaking at the rally were Josh Tulkin of the Sierra Cub, Barbara Coufal of Citizens Against Beltway Expansion and Nancy Soreng, of League of Women Voters.