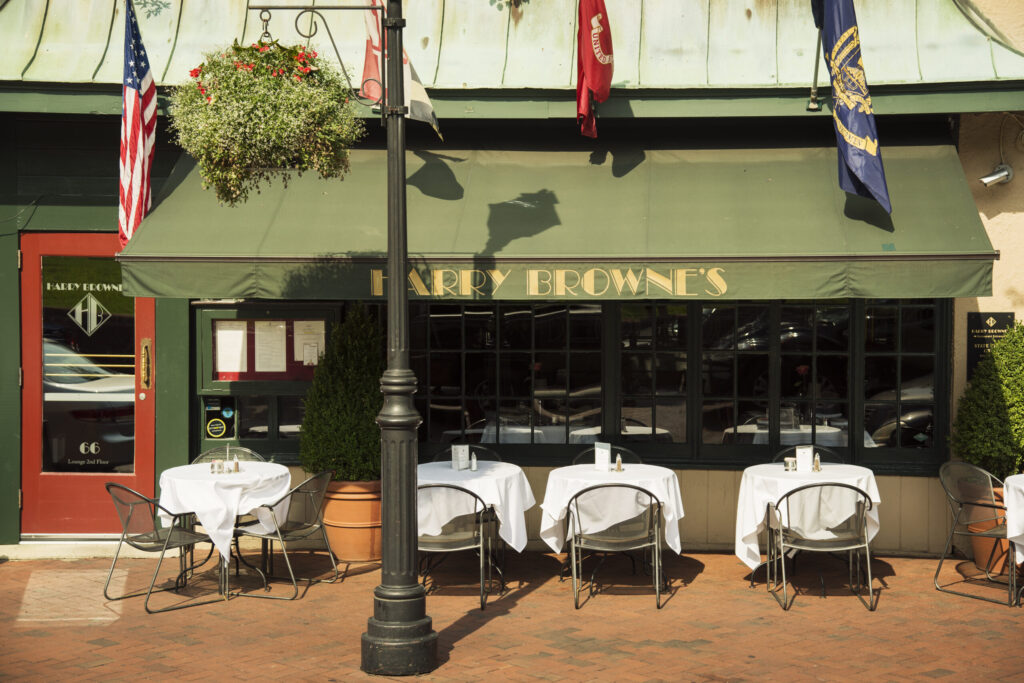 Due to the pandemic, Harry Browne’s, across the street from the State House in Annapolis, won’t be the center of gravity in Maryland politics in early January, the way it is most years. Photo by Brycia James/Getty Images.

For Maryland lawmakers, there’s always a fundraising scramble in early January leading up to the start of the General Assembly session, when a 90-day blackout on raising money kicks in for state legislators, the governor, lieutenant governor, attorney general and comptroller.

According to lists of political events supplied by three Annapolis lobbying firms, at least 55 fundraisers for state lawmakers are on tap between Monday and the evening of Jan. 11, hours before the annual legislative session begins on Jan. 12. That’s pretty standard for this time of year.

But COVID-19 has changed everything.

In most early Januarys, a person could migrate from Harry Browne’s and the Calvert House on State Circle in Annapolis, to Red Red Wine Bar on Main Street and a few other venues in the state capital, and see most of the General Assembly — along with the lobbyists, advocates and special interest representatives seeking to influence them with 11th hour campaign contributions.

Last year, unsurprisingly, an overwhelming number of the pre-session fundraisers were held online due to the pandemic. COVID-19 vaccines were just beginning to be rolled out, and the legislature had already announced major restrictions on access to the State House and other legislative buildings.

This year, things promised to be different. A month ago, it appeared as if no more than 20% of the early January fundraisers would be virtual. Several lawmakers and candidates — Democrats as well as Republicans — had resumed in-person fundraising after the 2021 legislative session ended in mid-April, and there was at least some hope that the 2022 session would be a little more “normal” than the prior one.

But the emergence in late November of the omicron variant, which has been spreading relentlessly across Maryland and the U.S., has forced many lawmakers to reevaluate on the fly — half a year before the June 28 primaries, and just before a three-month period when challengers will be able to keep raising money even though incumbents can’t.

Over the past few days, Maryland Matters asked fundraising consultants and individual lawmakers about their plans for their early January fundraisers. A little over half had responded as of Sunday evening.

The bottom line: Republicans seem likely to continue with their in-person plans, while most Democrats — though not all — have switched their fundraising events to virtual. A few Democrats are attempting to make their fundraisers hybrid affairs. And some lawmakers of both parties said they are still assessing their options even as their scheduled events draw near.

Sen. Cory V. McCray (D-Baltimore City) said he would proceed with plans to hold an in-person fundraiser on Tuesday evening at the Mack Lewis Boxing Gym in East Baltimore. McCray said he wanted to spotlight the work and community programs taking place at the historic location — and added that community members were excited the event was being hosted there.

Two Democratic senators said they were making their fundraisers hybrid events. Sen. Malcolm Augustine (D-Prince George’s) said the plan all along for his Jan. 10 breakfast fundraiser at the Courtyard by Marriott in New Carrollton was to make it hybrid, so that people who weren’t comfortable attending in person could view it online.

Senate Education, Health and Environmental Affairs Vice Chair Cheryl C. Kagan (D-Montgomery) has made her late afternoon fundraiser on Wednesday a hybrid affair. Kagan traditionally serves donors milkshakes at this annual fundraising event, held at Chick and Ruth’s, an Annapolis delicatessen famous for naming dishes after elected officials (the Senator Cheryl C. Kagan Milkshake has cookies and cream and peanut butter ice cream served with Hershey’s chocolate syrup). This year, Kagan is offering contributors who are hesitant to come inside the deli the option of picking up a shake curbside.

Del. Karen Lewis Young (D-Frederick) said she would make the call on a fundraising breakfast scheduled for Jan. 10 at Harry Browne’s sometime this week. She said the event would probably attract about 25 people, making it theoretically possible to spread out attendees safely.

Similarly, House Minority Leader Jason C. Buckel (R-Allegany) said “it is to be determined” whether his late afternoon fundraiser Thursday will take place as scheduled at the Annapolis Market House.

But several other Republican events appear to be proceeding in person as advertised — though donors can skip attending in-person if they don’t feel comfortable. A midday event on Jan. 11 at Red Red Wine Bar, originally scheduled as a fundraiser for Cecil County Dels. Kevin C. Hornberger (R) and Michael Griffith (R), has been expanded to include the rest of the District 35 delegation and the entire House Republican Caucus, Hornberger said.

‘I am reluctant to host another crowded gathering’

At least two lawmakers have taken novel approaches to their pre-session fundraising.

Sen. Christopher R. West (R-Baltimore County) only recently scheduled a fundraiser because, he said in a note to supporters, he wasn’t sure if he was going to run for reelection until he saw the draft map for new legislative district lines, which will be finalized during the upcoming session.

“I seem to have come through the fires of legislative redistricting and have emerged with a stronger Republican district than I had before,” West, a moderate Republican, wrote. “I feel rather humbled that the leadership of the General Assembly seems to feel that I am a valuable State Senator who should be strengthened rather than weakened or eliminated in the redistricting process.”

West went on to note that while he traditionally holds a pre-session fundraiser at the Annapolis office of the American Institute of Architects, “I am reluctant to host another crowded gathering this year. None of us wants to catch COVID just before the Session starts.”

Instead, West solicited contributions and says he intends to hold a virtual open house — for donors or non-donors — on Jan. 11 from 10:30 a.m. to 3 p.m. “I would love to meet with you virtually during that period of time,” he said.

Sen. Mary L. Washington (D-Baltimore City) is doing something even more unusual — she’s staging a non-event event on Friday evening. Instead of her traditional early January fundraiser at Gertrude’s restaurant in the Baltimore Museum of Art, Washington has decided to solicit funds but dispense with a virtual alternative.

“In the past 22 months, we’ve gotten very, very tired of Zoom,” she wrote to supporters. “We enjoy a good party, but our style is to keep it safe. And no party is safer than a non-event party. So, instead of asking you to spend your Friday night in front of a Zoom screen pretending it’s enjoyable or standing outside in the cold under a tent, we are asking you to raise a glass for a toast wherever you are able to stay warm and with your folks.”