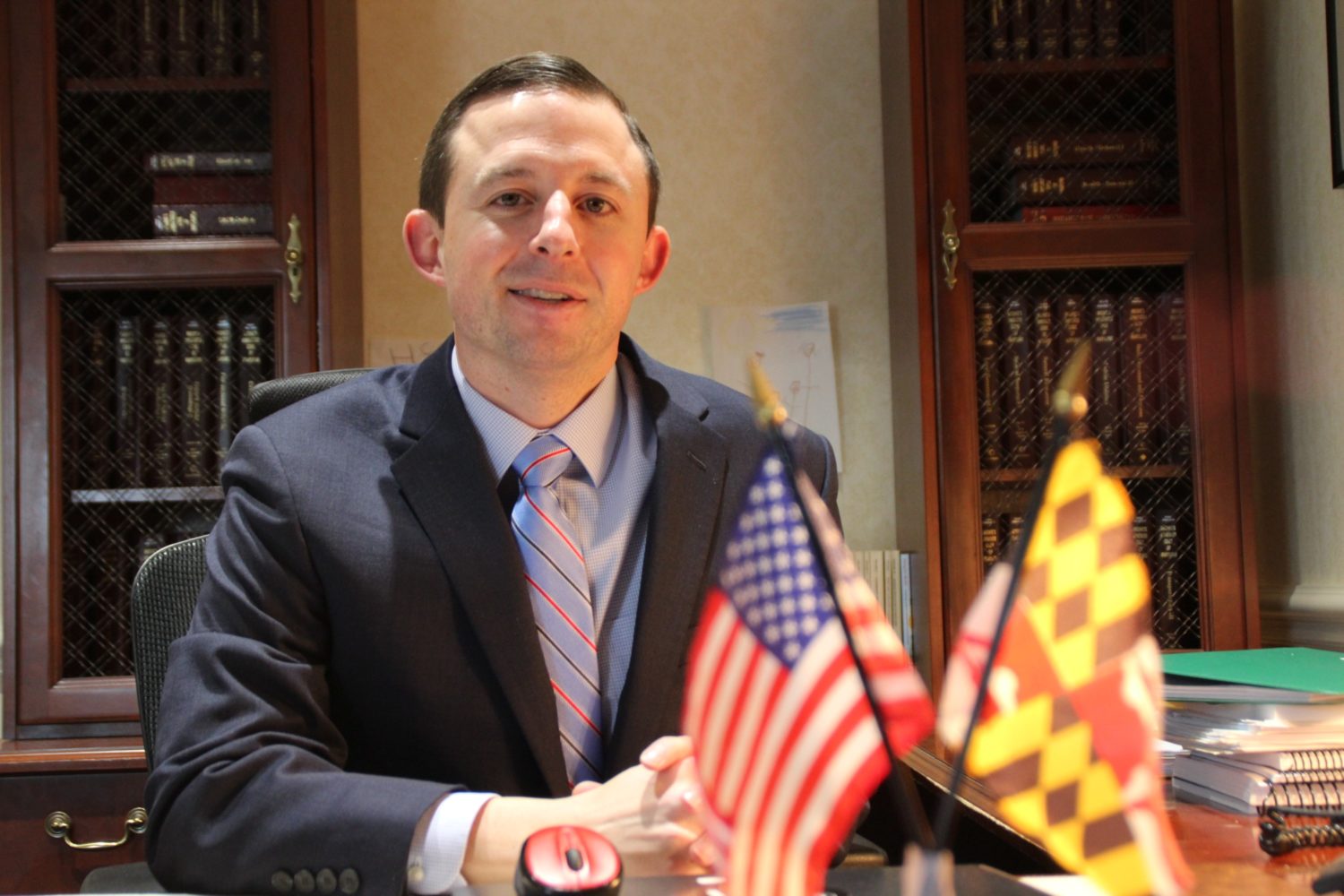 The first time Bill Ferguson practiced presiding over the Senate chamber, he thought he was doing it wrong.

“I would hear Senate President [Mike] Miller’s voice in my head when I was reading, and so my initial reaction was that I didn’t sound right because it was a different voice coming out,” Ferguson said.

Ferguson, the new president of the Senate chamber, realizes he has big shoes to fill. Miller served as Senate president for more than three decades and was the longest-serving state Senate president in the country. The 36-year-old’s elevation represents a generational shift for Maryland politics, along with a cultural shift embodied by the ascension of Adrienne Jones, the state’s first female and first black Speaker of the House of Delegates.

So he’s working on distinguishing himself while facing the challenges of a new General Assembly session. Those challenges include working on a new school funding formula backed by Democrats in the assembly and guiding the chamber through controversial bills that have failed in the past, including gun control measures and legislation to legalize recreational marijuana.

“It’s going to take a lot of listening” to get the funding formula across the finish line, Ferguson said. “I think I’ve learned as a legislator that the best work happens by listening.”

His colleagues are happy he is listening and say he is the right person to help push through the funding recommendations from the Commission on Innovation and Excellence in Education, also known as the Kirwan Commission.

“He brings an exciting new energy,” says Sen. Cheryl Kagan, D-Montgomery County, vice-chair of one of the committees overseeing the Kirwan recommendations. “He was chosen by us as the consensus and obvious pick because of his skills. Because of his passion for policy.”

The Teacher Is Now President

Ferguson isn’t a stranger to the issues that plague the state’s public schools. In 2005, he left his hometown of Bethesda and moved to Baltimore to work as a history teacher for Teach For America.

“Being a classroom teacher was the hardest job I’ve ever had and can imagine ever having,” Ferguson said. “It’s such an enormous responsibility to be responsible for the long-term trajectory of the young people that are in front of teachers on a daily basis.”

Despite hailing from Montgomery County, he has fallen deeply for Baltimore.

“I just loved the city when I moved there. It’s where I met my wife, who was teaching alongside of me,” Ferguson said. “We got really excited about expanding opportunity and Baltimore was a place we could have an immediate impact.”

Over his nine years in the Senate, Ferguson has worked on issues including transparency in government, education, health, the budget and ethics. He has also signaled his openness to the legalization of recreational marijuana, which differs from his predecessor.

He now leads a younger and more diverse Senate than Miller, but there several of senators who are two to three decades his senior.

“I don’t feel challenged by my age,” Ferguson said. “I think my theory of leadership is leadership with people, not over people.”

If Ferguson comes off as confident, he was anything but when he first considered the role. He even asked Miller to stay on the job.

“I think [Miller’s] really provided a level of stability and predictability that’s very helpful and that I’ve learned a lot from,” Ferguson said.

Instead, Miller has publicly boosted him and taken a seat in the back of the chamber (where he will continue to work as a senator representing parts of Prince George’s, Charles and Calvert counties,) to give Ferguson space to grow.

To hammer this point home, Miller evoked the Netflix film on the retirement of Pope Benedict and the ascension of Pope Francis.

“Has anyone seen ‘The Two Popes’ yet? It’s on Netflix,” Miller said. “You’ve got the old pope and the new pope. And the old pope isn’t supposed to say anything. That’s me.”

Nowadays, Ferguson’s schedule has been busier than usual figuring out his new role in the Senate while raising two kids, both 10 and younger.

“It has been a seismic shift in my life,” Ferguson said. “You know there’s been a lot of new. This has been a hard transition when it comes to time allocation and so honestly I’m still trying to figure everything out and make it work.

“Ultimately, I did not see myself in this position initially until very late in the process,” he said. “I feel very honored and humbled to have the support of my colleagues.”

A Different Brand Of Politics

Miller brought a more centrist ideology to the Senate, said David Lublin, an associate professor of government at American University. Miller is a Catholic, born in a conservative district of southern Maryland.

“Miller was seen as being on the right-wing of the Democratic caucus. Ferguson is more in the middle of it and much more aligned with some of the new progressive senators,” Lublin said. “I don’t see him as an ultra-progressive, but I do see him as practical.”

While Ferguson represents a younger and more progressive demographic, as president he’ll have to accommodate all voices, said John Willis, an expert on the Maryland General Assembly.

“Many issues cut across legislative districts’ lines,” Willis said. “The Senate is a smaller, more collegial body. You have to be engaged personally with all your colleagues. It’s going to be very interesting to see how that evolves.”

“Bill [Ferguson] and I came into this chamber together,” Jennings said. “He has reached out to this side of the aisle. He has visited all of our districts to find out what it’s like.”

Ferguson also recognizes that this job is not about his priorities.

“This role is about presiding over a chamber of 46 other senators,” he said. “It’s not about one person’s politics. And I think it will be more a reflection of where the Senate as a whole is than anything else.”

Despite all of these changes, Ferguson says he wants Marylanders to know that the legacy of the Senate is in good hands.

“We have got to maintain that long history and demonstrate stability to the public and so we will,” Ferguson said. “That is an enormous priority even though it is not a single piece of legislation.”