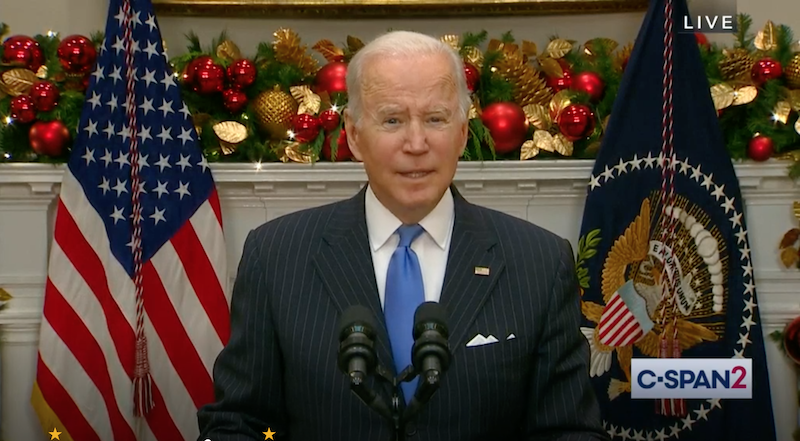 It is hypocritical for President Joe Biden to have implemented travel restrictions on South Africa and seven other African nations in response to the rapid spread of the COVID-19 Omicron variant after having harshly criticized then-President Donald Trump for taking similar actions with China during the early days of the pandemic in 2020, several of the state’s GOP lawmakers said Thursday.

Chisholm, who sits on the Health and Government Operations Committee, added: “The new variant appears to be very mild. We have yet to have a single death or even anyone hospitalized. But he (Biden) comes out immediately and imposes this travel ban. It is a thumb in the eye to American people or anybody who wants to pay attention. He went out and lambasted Trump on a virus which we knew very little about at that time.”

“You cannot be critical in one area, stating that you cannot do a ban, and then all of a sudden do one yourself. It makes you look like a hypocrite. You have to go with the standards that you have lived by or your word. And if your word does not mean anything, and you go in the same direction that you said you should not go, then why did you do it in the first place?”

“You should be truthful to everything that you do and you say…This is not political. These are people. Stick with what you should. And always go by that. If you do not, how can you be trusted?

“What they (Democrats) do is fine. And what we as Republicans do is wrong, even if it is the same. They can make executive orders that tell states that they cannot do what they want to do. Yet while Trump was in office, they told him that he could not stop states from doing what they wanted to do. It is hypocrisy.”

But not everyone said Biden’s decision is hypocritical.

“I think the Republicans are grasping at straws,” Sen. Cheryl Kagan, D-Montgomery, said.

“Donald Trump’s travel ban was based on hate, ignorance, and division. And President Biden’s is based on science and trying to protect Americans’ public health,” Kagan added.

Kagan, who is vice-chair of the Education, Health, and Environmental Affairs Committee, said she is confident that the Biden administration has both the expertise and the tools at its disposal to deal with the threat posed by the Omicron variant.

At a news conference at the National Institutes of Health on Thursday afternoon, President Biden announced that the federal government will soon require all international travelers to the U.S. to test negative for COVID-19 24-hours before their departure flight as a pre-condition for entry into the country. Previously, all inbound international travelers to the U.S. had a two-day window before their departure flight in which to test negative.

So far there are at least 10 reported cases of the Omicron variant in the U.S.

‘Tis the Season for Giving: How Nonprofits Benefit

Maryland moves to advance Next Generation 911