In a Unique Summer Primary, When Can Marylanders Expect Election Results? 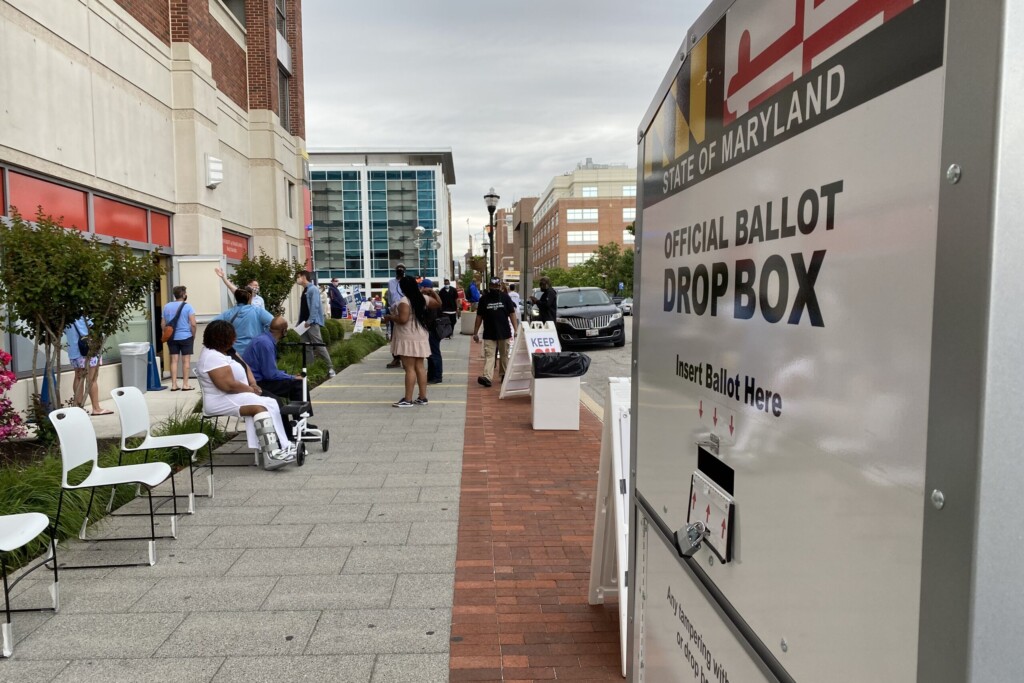 A Maryland ballot dropbox was placed at the University of Maryland at Baltimore Community Engagement Center on West Baltimore Street for the June 2020 primary election. Photo by Hannah Gaskill.

Just over a week ahead of Maryland’s primary election, voters are trickling into early voting centers and dropping ballots in mailboxes and dropboxes throughout the state.

But when will election results be known?

There could be a delay in clear election results this primary, the result of a dramatic shift by voters to mail-in ballots and the veto of a bill that would have allowed elections officials to start processing those ballots before election day.

The popularity of mail-in balloting exploded during the COVID-19 pandemic, when mail ballots were sent to every voter during the 2020 primary and a mail-ballot application was sent to everyone for the general election.

In 2020, an emergency executive order by Gov. Lawrence J. Hogan Jr. (R) tied to the pandemic allowed local boards of election to start counting mail-in ballots more than a month before election day.

More than 1.4 million mail ballots were counted in the primary election and more than 1.5 million were tallied in the general.

The General Assembly passed a bill this year that would have allowed ballot processing and counting of mail-in ballots eight days before early voting started.

But Hogan vetoed the bill, citing concerns that it lacked “basic security measures” for mail-in balloting, including signature verification, a common practice in other states, or a prohibition on ballot harvesting.

“The governor is a strong supporter of early canvassing — which he authorized in 2020 — and had the legislature sent him a clean standalone bill, he would have been amenable to signing it,” Ricci said.

As a result of the veto, the first canvass of mail ballots allowed under existing law would begin on the Thursday after the primary election. A final canvass is anticipated on July 29.

“My worry in all of this has been reinforcing the conspiracy theories. We’re all used to getting election results on Tuesday night or Wednesday morning,” Kagan said. “If they can’t open the envelopes until Thursday at 10 a.m. … it could be a week or more before we get election results.”

But the governor’s office said the conditions don’t exist for him to change election deadlines by declaring a state of emergency under current state law.

The State Board of Elections could have pursued legal action to change the canvassing dates, but decided not to in late June.

State Board of Elections Chair William G. Voelp (R) said the board’s decision not to go to court was because “the timeline was unbelievably narrow.” Getting a case heard and decided likely wouldn’t have been done fast enough to allow for a meaningful pre-Election Day processing or vote-counting period, he said.

According to the National Conference of State Legislatures, Maryland is the only state this election year that specifically prohibits processing mail-in ballots before the polls close on Election Day. Thirty-three states allow counting of mail-in ballots on or before Election Day.

Some local officials have expressed concern about Maryland’s reporting timeline this year, given the potential volume of mail ballots, which take longer to process.

More than 10 times as many mail-in ballots have been requested this year compared to 2018, the last time the current rules were used for counting mailed ballots.

“It’s safe to say it’s going to be a long process for this primary,” said David Garreis, president of the Maryland Association of Election Officials. “…The way we do it, starting that Thursday after Election Day, is a very old-fashioned anachronism from back in the day.”

He cautioned that the initial results voters see on Election Day could change as ballot canvassing continues.

“What you see on election night … once we get done counting all the ballots, the results could change,” Garreis said.

That’s especially true for “down-ballot” races like county council seats where the electorate is smaller.

In recent years in Maryland, several elections have been decided by very slim margins, including two county executive primaries in 2018 — in Montgomery and Baltimore counties — that were decided by fewer than 100 votes.

Voelp, chair of the state elections board, noted that election night vote totals have never been final.

“One of the reasons we don’t certify elections until [10 days] after is so that every vote that can be legally cast is counted,” Voelp said. “…Whether it is a provisional ballot that canvassers decided to accept or any mail-in ballot, every vote will be counted. Every vote.”

The state board plans to pursue a solution to allow for early ballot processing before the November general election, Voelp said.

Mail-in ballots must be postmarked on or before the July 19 primary date, or returned at dropboxes throughout the state. A list of dropbox locations is here.

Ninety-six early voting centers across the state are open from 7 a.m. to 8 p.m. through July 14.

About 1.5% of Maryland voters have visited early voting centers across the state since Thursday, casting more than 59,000 ballots.