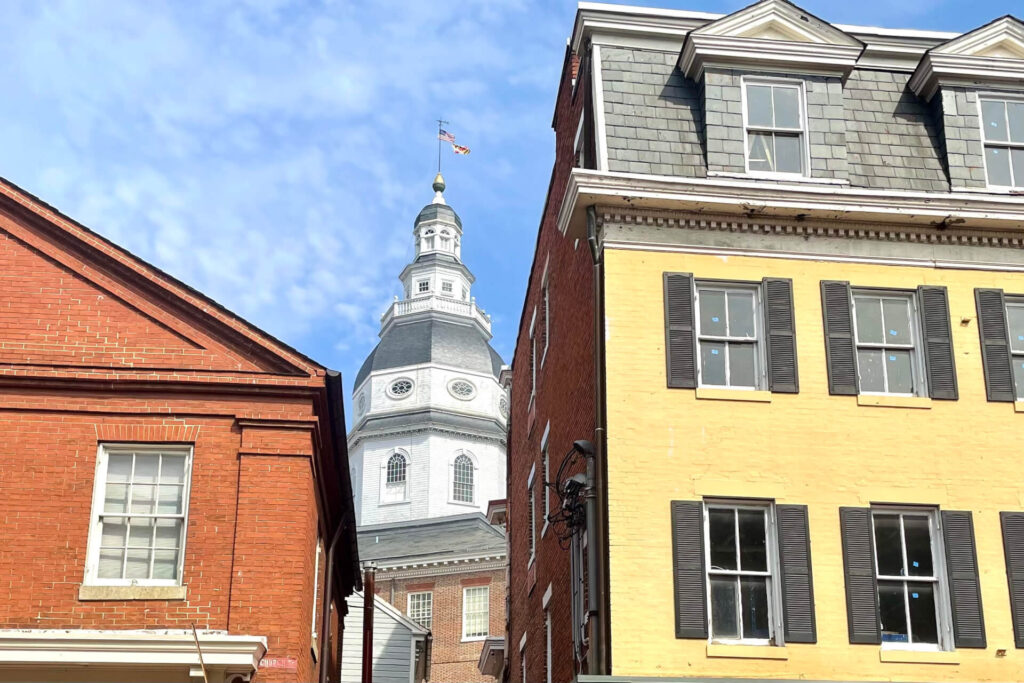 The Maryland State House as seen from Main Street in Annapolis. Photo by Danielle E. Gaines.

During the COVID-19 pandemic, some of Maryland’s government employees have faced threats from more than just the virus.

Non-elected public officials have been the targets of threats and harassment over safety protocols and other policy changes necessitated by the pandemic.

But while threatening an elected official is a misdemeanor punishable by up to three years in prison or a fine of up to $2,500 or both, civil servants don’t have the same protection under state law.

Health officers, planning and zoning officials and election workers also should be protected under the state’s anti-harassment provisions, Kevin Kinnally, legislative director of the Maryland Association of Counties, said in an interview.

“The law that’s on the books right now for elected officials, we’re not sending people to jail, but it is important to have that protection,” Kinnally said. “And we think that our forward-facing folks who perform these duties should have the same response protections as elected officials.”

Kinnally said there wasn’t a specific incident that put protecting public officials at the top of MACo’s 2022 legislative priorities, but he said there’s an uptick in harassment of public officials in Maryland and across the country and the need for protections is clear.

Before resigning to take another job, former Montgomery County Health Officer Travis Gayles faced racist and homophobic attacks in response to his public health decisions; in October, the National Association of County and City Health Officials asked the U.S. Department of Justice to step in to stop “the violence, threats, and harassment faced by public health department leaders and staff in the course of fulfilling their duties.”

At least one lawmaker is planning to introduce a bill on this topic. Del. Karen Lewis Young (D-Frederick) said in an interview that her legislation will protect public health officers and hospital workers from threats and harassment. Lewis Young sponsored similar legislation to protect public health officers during the 2021 legislative session, but that effort was unsuccessful.

Lewis Young wants anyone responsible for the treatment of a patient at hospitals added to state law,  in addition to public health officials.

Lewis Young said she decided to focus the legislation to protect healthcare workers and public health officers to give the more specific bill a better chance of passing. She said she’s speaking with healthcare workers across the state to get quantitative data on harassment during the pandemic.

“Our hospital workers and our public council officials that are treating the coronavirus or providing guidance on how to protect from it are targeted from a very different perspective,” than election workers, Lewis Young said.

Threats against hospital workers have ticked up nationwide during the pandemic: According to a study by the Centers for Disease Control and Prevention (CDC), 23.4% of public health workers surveyed reported “feeling bullied, threatened or harassed” because of their work.

Protecting local government employees is one of a handful of priorities for the Maryland Association of Counties — a potent lobbying force in Annapolis — during the legislative session that launches Wednesday. Here’s a quick look at the association’s other top priorities:

The state has traditionally split costs evenly with local jurisdictions for election systems, such as voting machines. But MACo wants that informal agreement enshrined in state law after the 2020 election caused unexpected costs to be borne by counties.

Kinnally said counties were stuck with the bill when the state decided to mail ballot applications to all registered voters during the 2020 General Election, although the state split the bill with counties for mailing the actual ballots. And while the 2020 election took place under extraordinarily unusual circumstances, Kinnally said codifying exactly when the state and local governments split election costs will help counties plan.

“I think that’s an example of where we just don’t have clarity,” Kinnally said, “and we’re relying on this uncodified language to govern election funding. When you’re someone who’s trying to do budgets or just know exactly how it’s supposed to work with the state and local funding for elections, it becomes difficult to sort of lay out those projected costs into the future.”

In addition to codifying the cost-sharing agreement between the state and counties, the bill would also require the state to provide itemized invoices to local boards of elections for their share of the costs.

“There have been counties that have been charged for services or goods that they did not use,” Kagan said. “Just as when we order something or pay for something, whether it’s at a restaurant or a store, we get a printed out receipt that shows the accuracy of the amount. State Board of Elections does not do that, and should.”

Kagan sponsored a bill during the 2021 legislative session to codify the cost-splitting agreement, but it didn’t advance out of the Senate Education, Health, and Environmental Affairs Committee where she is vice chair.

Local governments are also losing money when ambulances treat people on-site rather than taking them to a hospital, Kinnally said, because state law currently recognizes treatment by emergency medical staff only when they transport a patient to a hospital.

“If they treat somebody on-site, if they take somebody to an urgent care or something that is not a hospital, they’re not reimbursed,” Kinnally said.

Kinnally said the current system, which largely requires emergency staff to transport patients to the hospital in order to be reimbursed, is “antiquated” and costs both local governments and patients money. He noted that some counties are also trying new programs that aim to avoid transporting patients to hospitals if they don’t need it.

Anne Arundel County’s recently implemented Mobil Integrated Community Health program, for instance, “identifies individuals who frequently utilize 911 for non-life-threatening medical reasons, and links them to community resources and medical/social programs that more appropriately meet their needs” and saw early success in reducing 911 calls, according to a release from the county.

“We have a lot of counties who are thinking outside the box and being innovative, and they are actually meeting people where they are and they’re providing these treatments to people who maybe frequently dial 911,” Kinnally said. “They’re trying to provide that preventative care out in the field. These are mobile integrated health teams, and those services are not reimbursable by Medicaid or private insurance.”

MACo is continuing its perennial push to restore highway user revenues, which were drastically cut during the Great Recession and have never fully recovered.

“Funding for local roads was cut by 90% in 2010,” Kinnally said, “And unlike most states, Maryland local governments maintain the lion’s share of roads.”

Kinnally said that legislation passed in 2018 temporarily expanded highway user revenues for local jurisdictions through 2024, but added that the time limit on that funding bump means that counties are facing a steep drop in their road repair and maintenance funding in just a few years.

He said that the state’s $2.5 billion budget surplus, combined with the recent passage of a $1.2 trillion federal infrastructure package, means that 2022 will be the “perfect time” to restore that funding to local governments.

“We need to bring that infrastructure funding home,” he said. “We need to make sure that it flows down to the folks who are actually maintaining the roads. And those are local governments.”