Four years ago, the primary for Baltimore mayor was plagued by problems. Could it happen again?

Four years ago, the primary for Baltimore mayor was plagued by problems. Could it happen again?

Louise Keelty begged elections officials for months to send her a ballot so she could vote in the Baltimore mayor’s race ― just as she has in every election since the 1970s. When they finally responded, there was a problem: The North Baltimore lawyer received two ballots, instead of one.

K.C. Kelleher still hasn’t received her ballot, despite repeated requests. The City Hall staffer, who has steadfastly been avoiding public gatherings, will likely have to don a mask and risk a trip to the polls.

City Councilman Kris Burnett says his office has been inundated with complaints from such frustrated voters: people who have received too many ballots at their households, raising fears of fraud, or none at all, prompting concerns about disenfranchisement.

“Voters have expressed a tremendous amount of frustration about how this is going so far,” the Democrat says. “I am very nervous about the outcome of the June 2 election.”

Four years ago, Baltimore’s mayoral primary was so beset with problems ― including nearly 1,200 more votes cast than voters who checked in at the polls ― that state officials were forced to take the unusual step of decertifying the results. It cast the outcome of a close race into doubt for nearly a month after the Democratic primary. Then-state Sen. Catherine E. Pugh was ultimately declared the winner, by fewer than 2,500 votes.

Now election watchers are worried 2020 is setting up to be a repeat of the chaos and confusion of 2016.

“I absolutely think we will not know who our next set of elected officials are on June 2,” Burnett says. “Once again, whoever wins the mayor’s race, there could be questions. There could not be a definitive mandate to lead. We just don’t need that level of confusion. I’m concerned for the city.”

For one, polls suggest this mayoral primary could be even closer than 2016.

In 2016, Pugh defeated former Mayor Sheila Dixon by less than 2% of the vote. This time, Dixon is in a statistical dead heat with former T. Rowe Price Executive Mary Miller and City Council President Brandon Scott, according to a recent poll for The Baltimore Sun, the University of Baltimore and WYPR-FM.

Moreover, due to the coronavirus pandemic, elections officials are conducting their first-ever citywide election done mostly by mail. And the rollout by state officials of vote by mail has been rocky not just in Baltimore, but statewide. Problems with the state’s distribution of ballots prompted one prominent legislator to call the situation a “hot mess.”

Baltimore elections director Armstead B.C. Jones Sr. didn’t inspire confidence when he declined to appear before a City Council oversight hearing in April about election preparedness. “I’ve been personally frustrated with the lack of responsiveness from the local board,” Burnett says.

In an interview Thursday, Jones said he doesn’t believe the 2020 primary will have the same problems as 2016. He said he’s hired a security company to closely watch the 15 drop boxes where voters can deliver their ballots if they choose not to mail them. And he has purchased plenty of hand sanitizer and extra masks for those who vote in person Tuesday at one of the city’s six voting centers.

Jones says he knows some people have received more ballots at their residence than there are registered voters. But he says elections officials have protocols in place to prevent fraud, and would only count the first ballot received from a voter.

He agrees, however, with citizens who complain that the vendor hired by the state failed to get ballots out to voters quickly enough, prompting many calls and emails to his office.

“I like vote by mail, but we definitely have to have a vendor that has the capacity if they’re doing the whole state,” Jones said. “If people did not get a ballot, the key thing now is they need to come to one of the six sites and vote in person.”

Voters without ballots also can request one electronically by emailing absentee.SBE@maryland.gov or calling 1-800-222-8683. The ballot must be printed and returned to a drop box by 8 p.m. Tuesday or placed in the mail and postmarked Tuesday.

Jones said he expects a significant number of ballots will be counted by primary day, but the count will continue for several more days. Voters have until Tuesday to mail in their votes. That could mean, if races are close, results that hang in limbo for days.

Ballots that are mailed this weekend, Monday or Tuesday likely won’t be included in the primary night total, Jones said. Elections officials are allowing all ballots they receive to sit untouched for a day before counting them due to COVID-19 concerns.

Despite Jones’ confidence, the track record from 2016 leaves lingering questions.

Four years ago, state officials decertified Baltimore’s primary results amid concerns about voting irregularities. Election workers from across the region conducted a precinct-level review, focusing on why more ballots were cast than there were voters who checked in at the polls.

The review determined that about 1,650 ballots were handled improperly, with 1,188 provisional ballots inappropriately scanned into the vote tally without judges verifying that the voters were eligible, and another 465 other provisional ballots that were wrongly not considered.

Among other issues: Eight data files went missing for about a day after the primary, some polling precincts opened late, and some released felons — eligible to vote under a new law — received a city Board of Elections letter erroneously telling them they might not be able to vote.

As the city’s population shrinks, Jones says that issue has more to do with residents leaving the city ― and not updating their addresses ― than anyone being disenfranchised.

“Look at East Baltimore and West Baltimore. How many vacant houses do you see? How many blocks have you seen torn down?” he asked rhetorically.

Additionally, more than 5,000 mail-in votes received by elections officials were not counted during the special election, mostly because they came in late. Ballots had to be postmarked — not just dropped in the mail — by Election Day. An additional 660 were not counted because the voter did not sign the ballot.

Nikki Charlson, the state’s deputy election administrator, has said local election bureaus have been instructed to contact voters who return their ballots without a signature in hopes of getting them to sign before primary day.

The department also allocated $1.3 million for an educational campaign, including TV, radio and print advertisements, to ensure that voters understand that ballots must be postmarked by Tuesday.

So far, 60 ballots in Tuesday’s Baltimore primary have been rejected because voters did not sign them.

In an email, Charlson said the State Board of Elections has a robust auditing program to ensure the integrity of the primary.

“These audits include comparing the number of ballots presented for counting against the number of accepted, rejected and deferred ballots,” among other checks, Charlson wrote. “The issues identified in the 2016 Primary Election in Baltimore City did not recur in the 2016 General Election or the 2018 elections.” 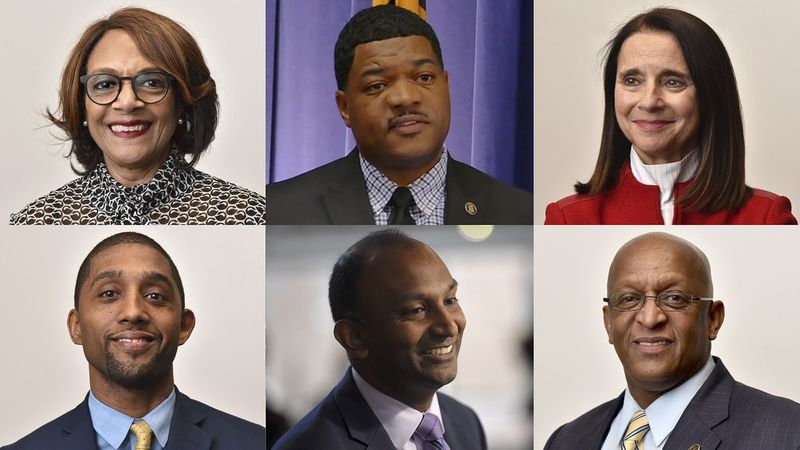 There are seven candidates in the Republican primary, as well as two unaffiliated candidates running in the November general election.

For decades, the primary contest among the city’s Democrats, who outnumber Republican voters by nearly 10 to 1, has determined who will be mayor.

There are other races of consequence on the ballot. Baltimore voters will decide competitive primaries for City Council president and comptroller, and elect new members to the City Council.

Moreover, voters will cast ballots for Congress, including a Democratic primary to run in November for a full two-year term for the seat held by Elijah Cummings of Baltimore until his death in October.

So I finally have my ballot for the Maryland primary. Now what? »

This year’s election problems haven’t been limited to Baltimore. State elections officials have acknowledged issues in distributing ballots to voters in other jurisdictions as well, including 90,000 primary ballots delivered to Prince George’s County voters with instructions provided only in Spanish.

Sen. Cory McCray, a Democrat who has been critical of various decisions made by the State Board of Elections ahead of the primary, said he expects legislators to hold a hearing to take stock of problems.

Those include Baltimore’s delayed ballots, an issue that directly impacts McCray’s East Baltimore district, but also other issues such as ballots that were delivered late in Montgomery County and the problems in Prince George’s County.

Until those issues are addressed, McCray said he will have serious concerns for the November election.

“Right now, I don’t have the confidence in the State Board of Elections that is necessary,” he said.

Still, McCray maintains some confidence that the primary results will be accurate. He said he and his staff have been working to expedite ballot delivery for constituents who are still without one. They’ve also been keeping close tabs on ballots returned in the district.

“At this moment, because I’m micromanaging and paying attention, I do feel confident,” he said. “But I’m not aware of everything happening in the other jurisdictions.”

State Sen. Cheryl Kagan, a Montgomery County Democrat, summed up her thoughts less delicately. “What a hot mess,” she said of the lead-up to the primary.

Kagan said some errors would be understandable given the abrupt switch to voting by mail that Maryland undertook in response to COVID-19. But the volume of mistakes has been “disastrous,” she said.

State officials have pinned responsibility for the late Baltimore ballots on their out-of-state vendor, a company called SeaChange. But it’s the state election board’s responsibility to provide oversight of that contract, Kagan said. And SeaChange officials have pushed back on Maryland’s claims, arguing ballots were delivered late because state officials turned over voter files four to five days later than expected.

Still other mistakes have been the direct responsibility of elections staff, Kagan said, including a problem during the April special election when a list of voters who requested absentee ballots was mistakenly not turned over to the vendor.

“This isn’t a question of ordering a new sweater online and having it arrive a few days later than you’d hoped,” she said. “This is about being able to exercise democracy and about a fundamental right and obligation to vote.”

Joanne Antoine, director of the watchdog group Common Cause Maryland, said the COVID-19 pandemic has forced organizations to scramble to adjust to a new method of voting and left some without adequate time to provide ample “voter outreach and education” as they would have in a typical year.

But Antoine remained hopeful that after two elections conducted mostly by mail, most of the kinks will be worked out before November’s general election.

If that election also is conducted by mail, Antoine said, “we’re hoping … because we have more time and we’ve tested this twice now in Maryland, that all of these glitches can be avoided.”