Members from five area synagogues joined together June 25 on the lawn of Shaare Torah in Gaithersburg to mark the loss of abortion access in the U.S. 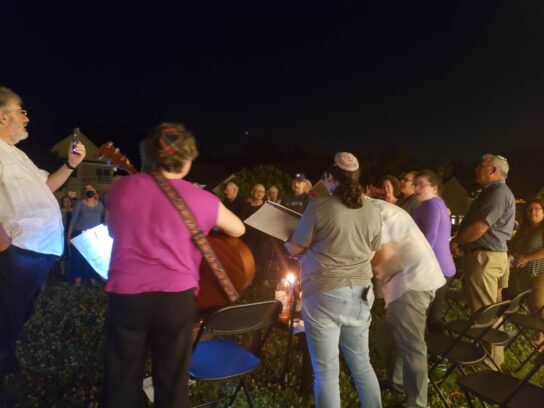 About 150 people sat in a semicircle singing songs along with Caitlin McLaughlin, cantorial soloist at Oseh Shalom in Laurel, reciting prayers and listening to Rabbi Marc Israel of Tikvat Israel in Rockville explain that the group was “brought together as a broader community.”

For many years, Israel said, people believed that women always would have access to abortions. He called that “a bedrock principal.” However, he noted, “Sadly that is one of the things we are mourning about. That is no longer the case.”

He urged everyone to organize, raise money and elect people in every level of government “who will bring about the world as we want to see it.” Israel added, “I commit myself to the day when all these rights will be restored for all women all over America.” 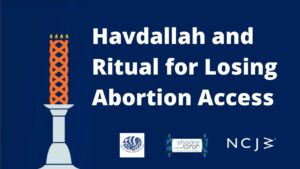 Rabbi Annie Lewis of Shaare Torah noted, “We are here tonight to find comfort.” As a result of the U.S. Supreme Court’s decision to overturn Roe v. Wade, “many people will be harmed, with disastrous results.” Some women will end up in poverty, others will be forced to stay in abusive relationships, she said.

“We will keep taking action together. We are going to pray for the redemptive strength to carry on,” she said as an armed police officer stood watching over the gathering.

Lewis said she and Co-Rabbi Yosef Goldman at Shaare Torah organized the event “so we could come together to pray and sing, as we left the holy time of Shabbat and moved into a new week and a new era,” she wrote in an email to MyMCM.