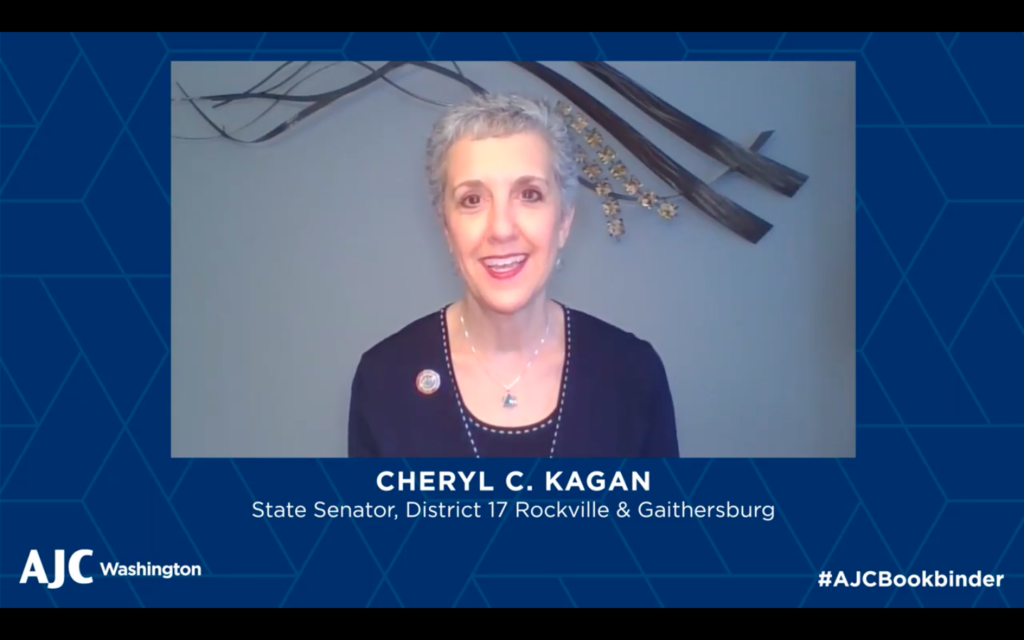 Maryland state Sen. Cheryl Kagan’s passion for civic service, the Jewish community and Scrabble were all mentioned at a virtual event honoring her on April 25.

“I know that for almost 20 years, Hyman ‘Bookie’ Bookbinder was the voice of the Jewish people on Capitol Hill,” Kagan said at the event. “He brought Jewish values to his work, and has left a legacy that continues on. For AJC to recognize me with an award named for this hero is really just one of the greatest honors of my life.”

Kagan has served on the AJC Washington regional board for more than 20 years and is a member of Congregation Har Shalom in Potomac. The congregation’s rabbi, Adam Raskin recalled a Shabbat dinner in 2013 during which Kagan contemplated running for the Maryland Senate.

“There at our dining room table, my kids became Cheryl’s unofficial campaign managers, rattling off ideas, suggestions and strategies for her future campaign. They were enthralled by Cheryl’s energy, passion and vision, and they practically demanded that she run for the Maryland Senate. To this day, they take a fair amount of credit for Cheryl’s decision to run for office in 2014.”

Rep. Jamie Raskin (D-Md.) praised Kagan for sponsoring the bill that repealed Maryland’s state song and for being “a force in the folk-rock music scene for a long time.”

Rep. David Trone  (D-Md.) said “Marylanders are lucky to have an energetic, effective, principled leader like Cheryl, working tirelessly for them.” And Sen. Chris Van Hollen (D-Md.) said “Hyman Bookbinder knew that enhancing the cause of justice doesn’t just go from one act, it demands a lifetime of action. That legacy lives on in Sen, Cheryl Kagan.”

Preparing for an A”May”zing Interim!