Advocates urge Maryland voters to request absentee ballots, then stick with choice to vote by mail 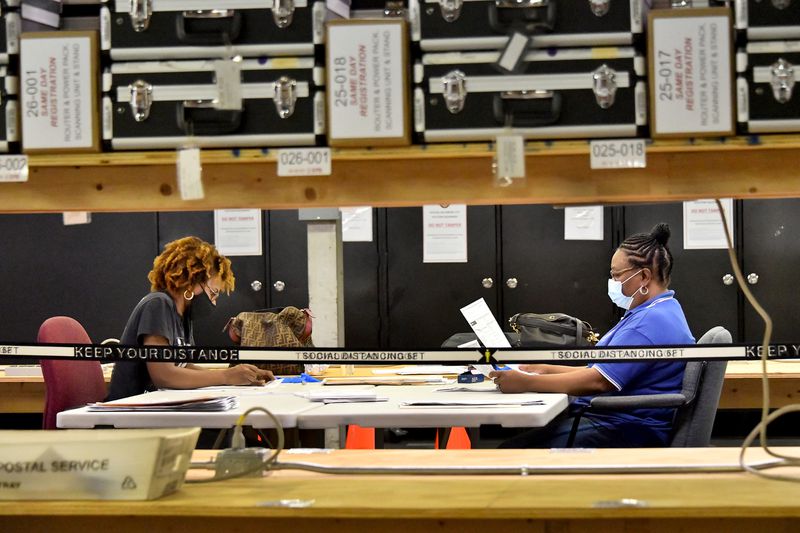 Doug Wolfe was hoping to get ahead of the November election.

The Montgomery County resident hadn’t received an absentee ballot application in the mail, so earlier this month, Wolfe submitted a request online. It felt like the right call in the midst of the COVID-19 pandemic, Wolfe explained. But then came news of massive delays in mail delivery due to U.S. Postal Service changes.

“That makes me very worried about the security of my vote and my vote counting,” Wolfe said. “If it doesn’t arrive, I guess I’m going to have to go vote in person.”

But that’s tricky. As Maryland’s election is structured, any voter who requests an absentee ballot can no longer vote on a traditional ballot — those are the ones on scanned into the machines on Election Day. Instead, those voters will be asked to fill out a provisional ballot, an instruction that sometimes surprises, angers or confuses people halted at the voting center check-in table.

Provisional votes can count, but they are set aside on Election Day. After scrutiny to make sure the voters who cast them are eligible, they are tabulated, although that happens late in the canvassing (starting Nov. 12 this year for the Nov. 3 election).

While that regulation is spelled out on absentee ballot application instructions due to be mailed to Wolfe and four million other Marylanders this month, it’s not something many voters realize.

Wolfe said he would have thought harder about submitting an absentee ballot request had he known in advance.

“I really take no comfort in that,” Wolfe said as he considered the prospect of voting a provisional ballot.

The rule exists to prevent people from voting twice — a safeguard that could be important in an election where officials are projecting that half the state’s population will vote by mail. But it’s a concern for some voters, particularly as reports of problems with the Postal Service mount.

Cost-cutting measures have resulted in significant delivery delays over the last month. And this month, new Postmaster General Louis DeJoy, a major Republican donor and ally of GOP President Donald Trump, instituted a hiring freeze and a major restructuring of the system.

Last week, Trump, a vocal opponent of voting by mail, said the Postal Service can’t handle what could easily be millions of vote-by-mail ballots due to its inability to access emergency funding he is blocking.

Liz Cronin, 29, of Baltimore, said the news about the Postal Service concerns her, particularly because she opted to request an absentee ballot for the November election. Cronin said she plans to cast the ballot at a drop box to avoid the mail, but there’s still the possibility that her ballot may not arrive at her home in the first place.

Cronin said she assumed she could vote a traditional ballot in person if her absentee ballot didn’t come in the mail.

“COVID is such a fluid situation in a lot of ways,” Cronin said, bemoaning the lack of options. “I can understand the intent to not have duplicate ballots, but it’s not great. There’s going to be a lot of people who, for whatever reason, don’t get their ballot in time.”

Vote-by-mail advocates argue the downside of being locked into a particular voting path is worth the reduced health risk afforded by avoiding Maryland’s 360 in-person voting centers. But they acknowledge voters need to be aware of the consequences of choosing to request an absentee ballot.

Democratic Del. Maggie McIntosh of Baltimore has been encouraging constituents for weeks to apply early for absentee ballots. She’ll kick off a phone campaign this week, along with several current City Council members and council nominees, to urge voters to apply. Their script for the calls includes a reminder about the provisional ballot rule, she said.

“You have to do one or the other,” McIntosh said. “When you request your ballot, that’s your ballot.”

Democratic state Sen. Cheryl Kagan of Montgomery County has also been vocal in telling voters to apply for absentee ballots.

In particular, she’s suggesting voters select mail delivery for their ballot. That’s because while voters have the option to have a ballot delivered via email, ballots printed and completed at home will slow down the counting process, Kagan said. The state’s scanners are not programmed to read ballots printed on copy paper, so elections workers will have to recreate those ballots by manually copying the votes onto standard forms.

“It takes a great deal of time to duplicate your ballot,” Kagan said. “It’s important that we try to minimize the number of this type of ballot.”

As of Thursday, Maryland received 210,634 requests for absentee ballots. About 48,500 of those were requests for digital delivery.

Voters worried about the mail can deposit ballots in one of at least 127 ballot drop boxes that will be offered around the state. All ballots are accepted by the boxes, whether voters print them or had them mailed to their homes.

Early voting will also be an option, offered at about 80 sites statewide from Oct. 26 through Nov. 2.